Dungeness - mild, overcast, W5 - A guided walk for 12 birders this morning concentrated on the circular walk around the pits taking in the hides. The blustery wind kept any passerines hunkered down and even most of the ducks took shelter behind banks and willow scrub; however we did manage to find a Firecrest in the willows on the approach to Scott hide. On Burrowes it was a struggle to a find a single Goldeneye and Shelduck amongst a host of common wildfowl, while the islands were smothered in hundreds of Lapwings, Cormorants and large gulls. On Dengemarsh another Goldeneye, a Great White Egret, 100 Wigeon, 100 Linnets, several Marsh Harriers and two Kestrels.
So, no problem with quantity then, but where`s the variety in the form of sawbills, a scarce grebe and maybe a diver or even a white-winged gull? Perhaps the much forecast cold snap at the end of the week will shake things up a bit. 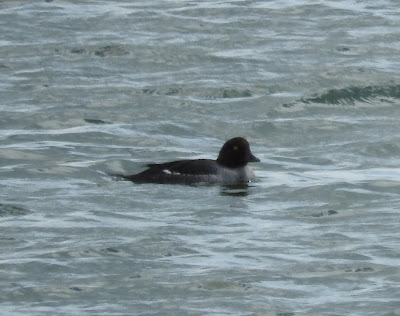 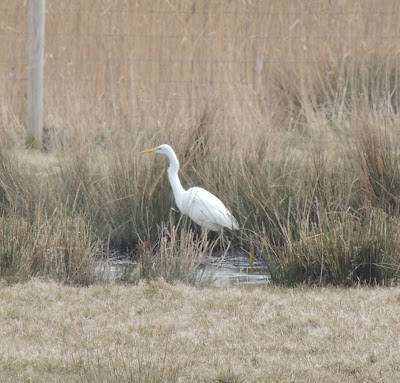 An hour at the fishing boats this afternoon delivered close views of hundreds of passing Cormorants, Gannets, Kittiwakes and auks, including several Razorbills, plus a few Red-throated Divers and a distant Bonxie.
A late check of Lade produced six Goldeneyes on south lake, and as the wind and rain increased we headed for home and a cuppa in front of the fire.
Posted by Paul Trodd at 10:29