Rye Harbour - overcast, mild, W 3 - Yesterday Pat joined us for a circuit of the Beach Reserve on a dry and grey, yet mild morning. All the usual waders were noted including a flock of 200 Golden Plovers and a party of 20 Grey Plovers that flew in from the bay, plus plenty of Redshanks, Lapwings and a few Dunlin, Curlew and Ringed Plover. Hundreds of Wigeon, Shoveler were scattered across the lagoons, while Long Pits was very quiet with only a few common diving ducks and a Kingfisher of note.  Unsurprisingly for a Saturday the place was packed with people and it took a while to locate the three Twite which had been seen around the John Gooder`s hide, but by the time we arrive had moved out onto Flat Beach in the corner towards the sea. We had poor views, but they were my first for the region since moving down here almost thirteen years ago.
On a positive note we can highly recommend the William the Conqueror pub for lunch, and its dog-friendly too which pleased Barney. 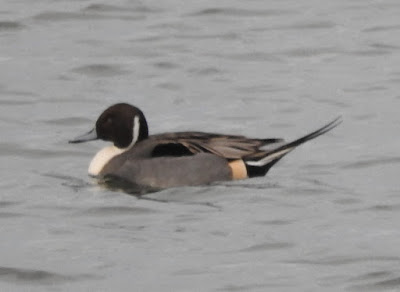 Sandgate - The weather was more of the same today and if anything even milder with temperatures reaching 12C by noon. After walking the local patch, where nothing had changed, we headed down to Folkestone to check out the Lower Leas Country Park for a magazine article. Scanning the sea at various places between Mill and Battery Points produced hundreds of Cormorants, Gannets and auks, mostly distant, plus a single Shag; I couldn't find any sign of the Great Northern Diver offshore, or Purple Sandpipers on the Hythe sea defence rocks, probably due to disturbance by clambering self obsessed people taking selfies on their phones.
Back on the Marsh a tour of the lanes via Newchurch was a dismal affair. On the bird reserve Burrowes was packed out with thousands of Cormorants and large gulls, Lapwings and common wildfowl, plus a drake Pintail. Dengemarsh had a Great White Egret and Marsh Harrier of interest, plus 10 Curlews on the Boulderwall fields, although yet again I couldn't find any Tree Sparrows around the feeders.
We finished the day at Dungeness with a sea watch from the fishing boats that delivered the expected Gannets, auks, divers and Kittiwakes.
Posted by Paul Trodd at 11:22