Dungeness - mild, cloudy, W2 - A circuit of the point first thing produced the usual mass of auks, Gannets, Great Crested Grebes, Kittiwakes and Gannets offshore, plus a flock of 50 eastbound Wigeon. A tit flock in the Trapping Area contained a Chiffchaff and two cracking Firecrests, our first of the year, not that I`m keeping much of a year list... Also noted Stonechat, Green Woodpecker, and a Peregrine over towards the power station. 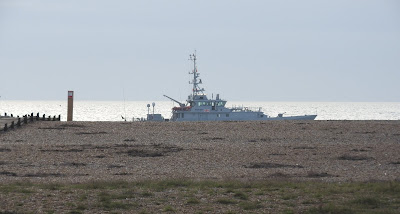 Back at the car, by the boardwalk, I noticed the Border Force cutter patrolling close to shore, apparently searching for migrants and then a police wagon stopped and asked me whether I`d seen anything, which I hadn't. An hour later whilst crossing the causeway road to Lydd I noticed the authorities had intercepted and detained some poor bedraggled souls, presumably who`d landed at Dungeness earlier.
There was no change to the wildfowl on Lade pits this afternoon.
Posted by Paul Trodd at 09:44