Lade - cold, dry and sunny, cloudy later, SW 4 - Despite the desperately frigid air and an overnight ground frost the migrants keep on trickling in. This morning`s newbie was a Reed Warbler steadily chugging away its monotonous song in the small reed bed below the aerial mound; a species that was rarely encountered so early half a century ago when I first started birding. Back then (dressed in regulation Parka and DMs and armed with a hefty pair of Charles Frank 10x50 bins and a red notebook and pencil) I would religiously jot down the first migrant arrival dates on my beloved local patch of Maple Cross Sewage Farm in the Colne Valley, a time when any self-respecting Reed Warbler wouldn`t have been heard until late April at the earliest and mostly into May. Anyhow, I digress. Also this morning Chiffchaff and Willow Warbler in song, but only a handful of Swallows over the lake, while it appears that the wintering trio of Goldeneyes have finally departed. On the beach this evening opposite the boardwalk were good numbers of small waders for a change, including 108 Sanderlings, 34 Ringed Plovers and 52 Turnstones. 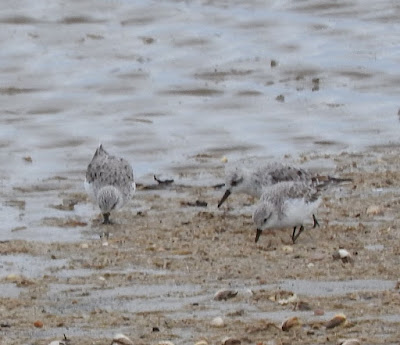 Sanderlings on the beach this evening

Yesterday afternoon a White-tailed Eagle (G463) from the Isle of Wight reintroduction programme, complete with satellite tracker, flew unseen over our cottage. It came across the Marsh from Hythe, over New Romney and Lydd and then out across the Channel off Dungeness at 13.05hrs. By 13.45hrs it was logged over Boulogne in northern France having covered the 47km (29 miles) in about 40 minutes, thanks to a north-westerly tail wind. Apparently this is the first one to have crossed the Channel onto the continent. How do I know this? Easy, to check out this and other eagle movements from the programme go to: twitter.com/RoyDennisWF