Lade - cold, dry and sunny, N2 - Coverage was limited on Saturday due to a steady drizzle and a brisk wind off the bay throughout much of the day. However, that didn`t prevent a clutch of warblers from dropping in overnight around the ponds, including our first Whitethroat of spring on the local patch. Sedge, Reed and Willow Warblers were also in song with the latter species making a return to form following poor numbers during the spring of 2020; infact that makes a total of nine species seen across the peninsula so far this year, including Dusky and Dartford Warblers, with hopefully more to come. 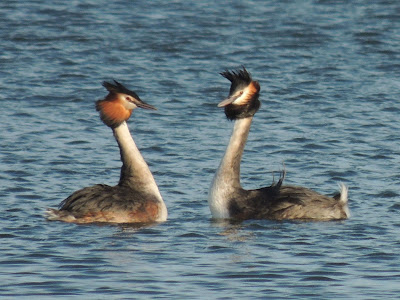 The weather was much better today with bright sunshine and lighter winds but still a chill in the air and nothing new on the migrant front; so the same warblers, plus several Swallows and a Yellow Wagtail over hurrying north with a few more during the afternoon. Being as it was WeBS weekend we spent a bit more time flogging around the lakes scanning the wildfowl and grebes, but numbers were low as to be expected in April with most ducks having departed for their breeding grounds and only Tufted Duck in double figures. A pair each of Greylag, Canada and Egyptian Geese looked to be shaping up to breed locally.