Dungeness - 0600 - 0800hrs - cold, frosty, poor viz, light airs - The thermometer showed -3 C just before 6am with the point shrouded in thick fog as I arrived on site. Mercifully it quickly burned off and in the company of TG, MC and CP we settled in for what could at best be described as a `pedestrian seawatch`. However, Gannets are eminently watchable and there was plenty of them offshore, fishing, resting on the sea and passing both ways, some inside the cardinal buoy. A steady trickle of Sandwich Terns rounded the point into Lade Bay while an up-Channel passage of Common Scoters and Brent Geese comprised the bulk of seabird migrants. Also noted a few auks, Kittiwakes and Red-throated Divers, two Mergansers, four Shelducks, five Fulmars, two Greylag Geese and at least nine Porpoises. At the Patch a Common Tern was amongst a flurry of gulls and a Yellow Wagtail flew over calling as it headed inland. 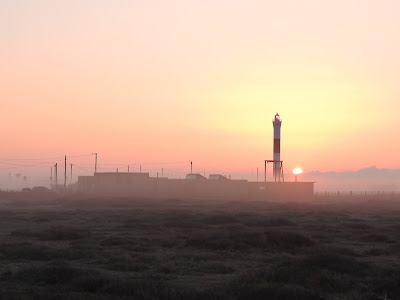 Sunrise over a misty Dungeness

There wasn`t much change on the local patch apart from perhaps a few more Linnets in the gorse laying claim to breeding territories and two Blackcaps singing from the willow swamp. Of note was the unusual behaviour of a Moorhen that clambered up into the bare branches of a sallow whilst bringing its nictitating membrane into play as extra eye protection. It then manoeuvered into position and eventually flopped across several branches to bask in the warm sunshine. 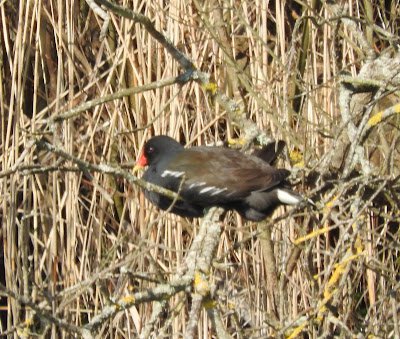 Elsewhere, a male Pied Flycatcher was located this morning by OL in woodland at the end of Dunes Road, Greatstone, although at times it proved to be very elusive.