Lade - cool, cloudy, NE 3 - The early morning sun soon faded as a cold front swept down from the north bringing increasing wind strength and single figure temperatures. However, our daily circuit of the local patch delivered the first Cuckoo of spring flying across south lake and into cover of the willow swamp where the surrounding reed beds are already filling up with their main host species, Reed Warblers. Scanning north lake and another summer visitor hove into view atop a patch of scrub on the airfield side of the water; a splendid male Ring Ouzel, a scarce spring migrant here and by no means an annual one. Yesterday much of the peninsula was cloaked in fog until mid-afternoon and the only noteworthy bird actually seen at Lade was a Fieldfare, although birds heard flying over in the murk did include two skeins of Brent Geese, several Mediterranean Gulls and two Whimbrels. 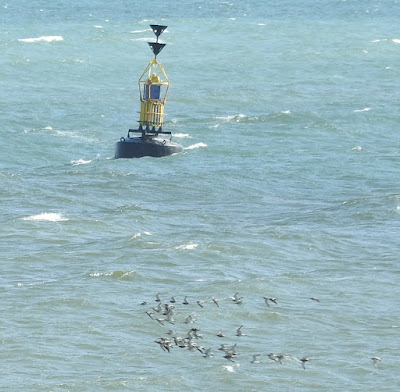 Bar-tailed Godwits on the move, Dungeness

A mid-afternoon hour from the seawatch hide with RW and MC was notable for a steady passage of around 200 Bar-tailed Godwits in several pulses, most of them inside the Cardinal buoy and many in summer plumage. However, there was little else on the move in the bright sunshine and brisk north-easterly apart from a few Gannets, Common and Sandwich Terns.