Dungeness - 0615 - 0800hrs - Cold, dry, good viz, WSW 3 - An enjoyable seawatch in the  company of TG, CP and MC from outside the hide produced a decent range of seabirds including three new for the year (not that I keep a year list, of course): singles of Arctic (dark phase) and Great Skua east and a west bound party of four close Velvet Scoters. Hundreds of Gannets were feeding/moving offshore amongst the gulls and Sandwich Terns, some close in providing a fine spectacle as they crashed into the sea from on high to catch sprats. Plenty of Common Scoters were logged up-Channel alongside a steady trickle of Red-throated Divers, Brents, auks, Kittiwakes (mostly way out), an Eider and two Shovelers; four Mediterranean Gulls, three Canada Geese and a Fulmar down. 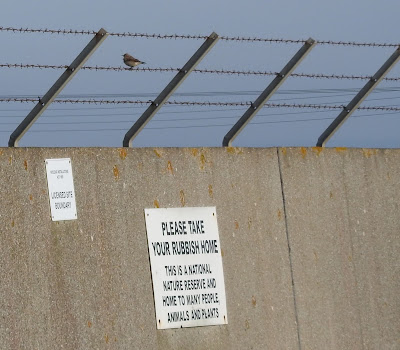 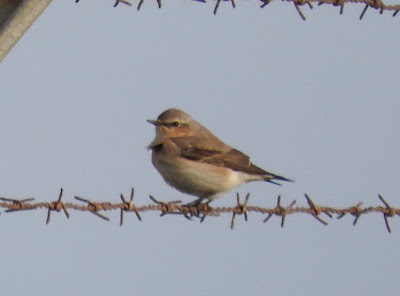 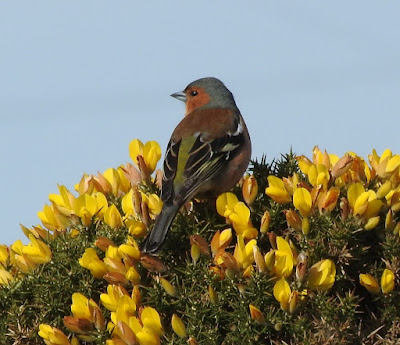 On the land a small fall of at least six Wheatears and a Black Redstart by the power station wall; our first Whitethroat of spring in scrub by the Desert; singing Willow Warbler, Blackcap and Chiffchaff in the Trapping Area; Cetti`s, Willow and Reed Warblers at Long Pits (where a male Redstart was found this afternoon); plus two Ravens, Sparrowhawk, Siskin, Swallow and 48 Carrion Crows over. 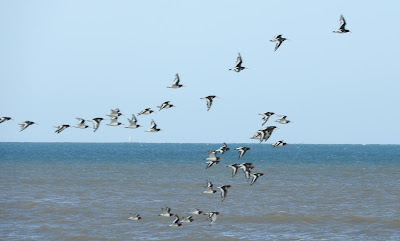 Oystercatchers on the bay

This afternoon a search of the bay on the outgoing tide revealed: 210 Oystercatchers, 206 Curlews, 35 Knots, 130 Sanderlings, 12 Barwits, 20 Sandwich Terns and lesser numbers of Turnstone, Ringed Plover and Dunlin, plus an oaf thinking it was comical to let his dog chase the Sanderlings along the beach.