Dungeness - 0545 - 0800hrs - cold, clear skies, sunny, light airs - An early morning seawatch with TG and MC produced a steady up-Channel procession of Gannets, Brent Geese and Common Scoters in the mid-hundreds and at least eight Velvet Scoters that I could discern; more were seen by sharper eyes than mine, along with four Little Terns. Also noted: 10 Red-throated Divers, one Black-throated Diver, one  Fulmar, eight Shelduck, four Teal, 10 Oystercatchers, 14 Whimbrels, one Bonxie, 10 Kittiwakes, 10 auks, 20 Sandwich Terns and three Common Terns, plus 10 Great Crested Grebes and two Guillemots on the sea along with the usual mix of Cormorants and gulls, Grey Seal and Harbour Porpoise and the long staying immature Iceland Gull at the Patch. 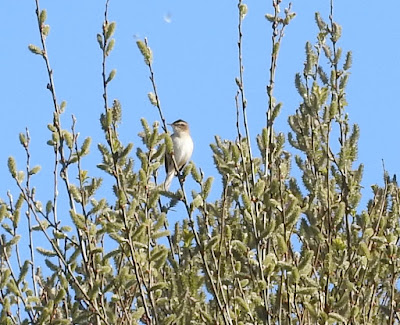 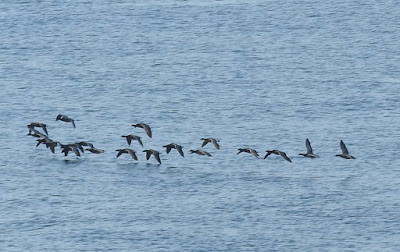 At Lade very little to report apart from a few Swallows through, ten Mediterranean Gulls over and 40 Bar-tailed Godwits on the bay this afternoon, along with a beached rib containing ten refugees who`d just made it to the `Promised Land`.