Lade - cold, dry and sunny, NE 3 - Another cold night and day due to the wind coming in off the sea; we can`t seem to shrug off this polar air flow which is forecast to be with us for at least another week and must be the death knell for some of our early spring migrants. However, on the local patch several Swallows hugged the sheltered willows on south lake where they appeared to find flying insects. Whitethroat, Reed and Sedge Warblers were all in song around the ponds and many more Linnets had moved in on the dry scrub. Oddly, there has been an increase in ducks (in line with the wintry weather perhaps!) with 20 Shoveler and four Pochard new in. 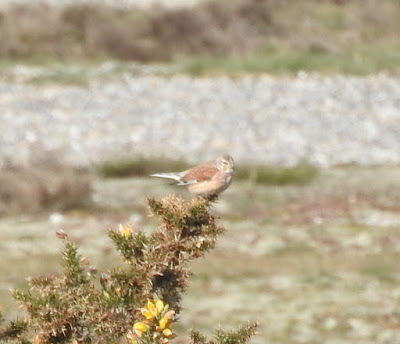 Linnet on the dry scrub

This afternoon I had another go for yesterday`s Pied Flycatcher at Greatstone that duly appeared low down in a blackthorn thicket near the railway line until disturbed by lads on tracking bikes; a fine adult male and a migrant that has taken on near rarity status in recent springs. Thanks to Dave Scott for his fine pics. Also noted around the small woodland and adjacent scrub: Blackcap, Chiffchaff, Whitethroat, Treecreeper, Green and Great Spotted Woodpeckers, Goldfinch, Linnet, Kestrel and Jay. Afterwards a trip down to Dungeness drew a blank on a Redstart in a private garden, but I did see my first Hare of the year, even though it only had one ear! 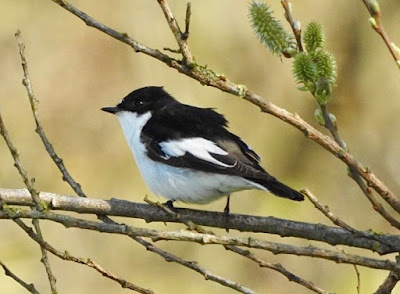 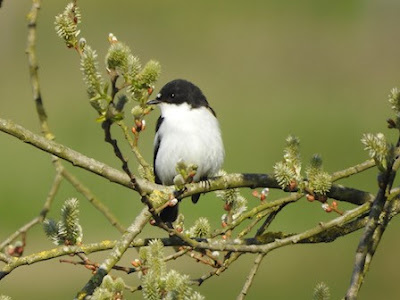 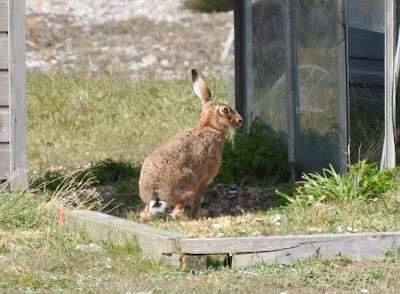