Dungeness - dry, sunny, mild, E 4 - Spent the day guiding for two guests from Bedfordshire commencing at the point where the highlights were a trickle of Gannets and Sandwich Terns in the Channel, an Arctic Skua, two Common Scoters and several Grey Seals and Porpoises. The land was very quiet but did deliver cracking views of a juvenile Merlin chasing Linnets by B Station, a Peregrine on A station and a Kestrel dismembering prey on the old lighthouse. Moving on to the bird reserve at Boulderwall where we mopped up with good views of the Glossy Ibis, two Cattle Egrets, a Great White Egret, two juvenile Marsh Harriers and a Hobby around Cook`s Pool, while on Burrowes, three Ruffs, a Snipe, a Black-tailed Godwit and a Garganey were the highlights. Next stop Lade bay on the incoming tide and the usual waders including 20 Knots, 10 Bar-tailed Godwits and three Shelducks, plus 10 Yellow Wagtails on the foreshore. Scotney front fields and lakes produced a notable flock of 10 Common Sandpipers along with more common waders, feral geese, 20 Yellow Wagtails and 20 Linnets. At Galloways Wheatear, Stonechat and Whinchat were all logged. We finished the day at ARC by the Screen hide with the usual wildfowl, eight Little and two Great White Egrets and a mixed passerine flock that contained Chiffchaffs, Long-tailed Tits and a Willow Warbler. Despite a nagging wind throughout the day we still gathered 86 species of birds for our guests. 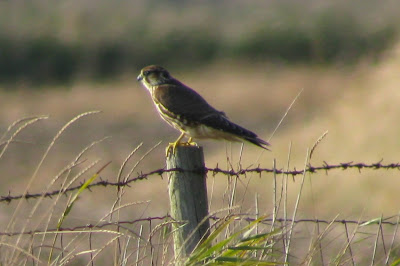