Lade - warm, dry and sunny, NW 2 - The local patch proved to be much of a muchness over the weekend with benign weather conditions producing a trickle of hirundines through, a few Chiffchaffs in the willow swamp and a handful of grounded Wheatears, Yellow Wagtails and Meadow Pipits. There was no change to wildfowl and grebe numbers from a week ago. 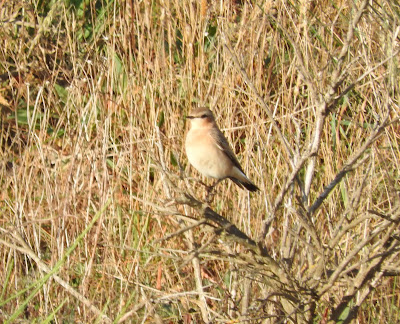 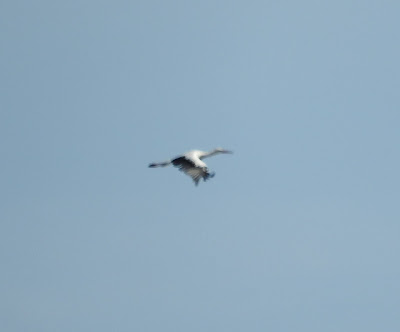 This morning a check of the front fields and lakes at Scotney delivered more hirundines, including several pulses of House Martins, 50 Yellow Wagtails, two Avocets, a Green Sandpiper, Curlew, Turnstone and Dunlin, plus all the usual feral wildfowl, Lapwings, gulls and Cormorants; Marsh Harrier, Common Buzzard and two Kestrels, Great White and Little Egrets also noted. Galloways Road held a scattering of Wheatears and Stonechats, two Whinchats, Whitethroat, Skylark, Meadow Pipit, Yellow Wagtail, Common Buzzard and Kestrel. Moving onto the bird reserve and at Boulderwall a probable Honey Buzzard went through, although I was driving at the time so didn`t get the best of views (MC saw the same bird from Lydd). Rounding the corner by the bee hives the roosting gulls went up over the shingle with a White Stork in their midst affording John Y and myself cracking views as it soared overhead (the pic above doesn`t do it justice). It had been reported down the coast earlier at Sandgate; a tatty adult bird in heavy wing moult that did not appear to be sporting any leg irons or plastic tags, so probably wild and maybe not a Knepp bird... We watched it for about 20 minutes or so until it soared up into the cloud base and drifted away to the east out of sight. From Dennis`s hide the usual array of wildfowl on Burrowes, plus a small mixed flock of Lapwings and Golden Plovers, three Black-tailed Godwits, Ruff and Common Sandpiper. A late afternoon visit to ARC and the `resident` Glossy Ibis was in situ on its favoured island, along with a Great White and Little Egret, plus two Cattle Egrets over the lake and two Black-necked Grebes on the water by Hanson hide.

White Stork flock - I`d just got in and settled down with a cuppa, around 1700hrs, when the local Whatsapp group went into melt down - David Scott had just reported, and posted a pic, of a flock of c40 White Storks kettling over Greatstone/Littlestone! Hang on, I thought, have we been transported to Gibraltar, surely not? But over the following hour said kettle of storks did the decent thing and soared over the peninsula affording good views over Lade and from the garden; (complementing the Black Stork from way back!). Most other local birders also got to grips with the spectacle at various ranges before they disappeared over towards West Hythe. The pic below by DS shows 39 birds while MC counted 46 from his pics taken from Lydd; even if it does turn out to be the Knepp flock it was still mightily impressive and a spectacle that will live long in the memory.

Chris Philpott also managed to get a couple of decent shots of the flock over the Romney Marsh, and many thanks to him for sending them through. 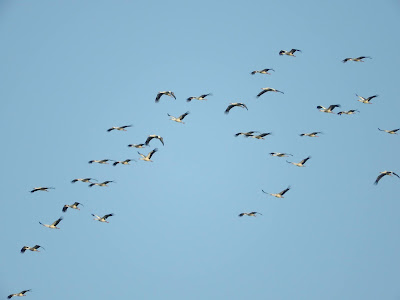 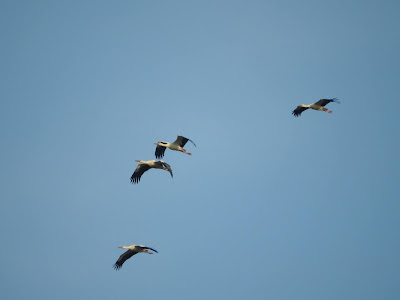 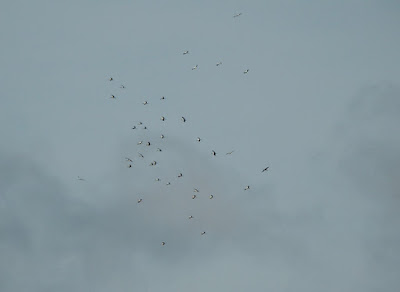 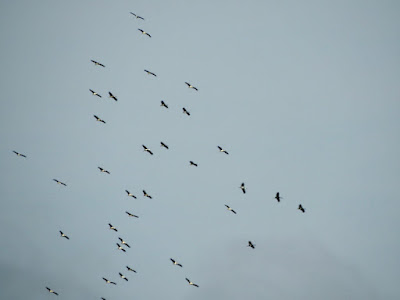