Dungeness RSPB - humid, light airs - We commenced a bird tour for Clare and Peter this afternoon on the bird reserve in steamy weather conditions where countless flying ants were being snapped up by thousands of soaring gulls, hirundines and Starlings. Even the passerines were getting in on the act with Chaffinches acting like flycatchers and a wide range of warblers, including cracking views of Reed and Sedge Warblers from the ramp and a Pied Flycatcher behind the old Firth hide. Burrowes was busy with waders, mostly hundreds of Lapwings and Golden Plovers, six Ruffs, Little Stint, Snipe and a Ringed Plover, plus all the usual dabbling ducks, including two each of Pintail and Wigeon. More warblers, tits and Chaffinches were noted around the circular route, plus Sparrowhawk, Marsh Harrier, Green Woodpecker and Raven. On the ARC the Glossy Ibis was in its usual spot just past the Screen hide along with three Garganeys, Great White and Little Egrets, plus two Black-necked Grebes further out on the lake and a Shelduck on the tern raft. Also noted this afternoon a Clouded Yellow by the return trail and a Fox cub in the ARC car park. The police and Border Force were kept busy today rounding up incoming refugees from across the Channel. 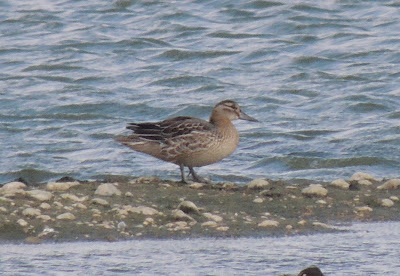