Dungeness - warm, sunny start, cloudy later, hazy light - ENE - SSE 2-3 - 0545 - 0830 hrs & 1200 - 1345hrs - Well, it had to happen some time this spring and today seemed set fair weather-wise to deliver an eagerly anticipated passage of Pomarine Skuas as they powered up-Channel en-route to their Arctic breeding grounds. During the two periods I was on site all passed well beyond the buoy with a flock of ten being particularly memorable as they coincided with a Black Kite soaring beyond the old lighthouse, which caused a temporary pause in seawatching by the gathered throng! When I left site the Pom tally had passed 50 with more to come no doubt during the afternoon, along with several Arctic Skuas and Bonxies. 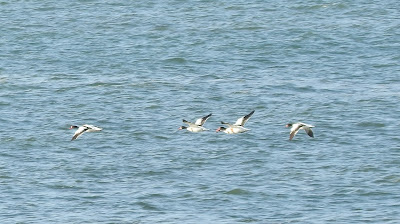 Shelducks on the move

There was also a steady passage of Commic Terns through the day, most too distant to specify, but some of the early morning flocks did fly along the beach and proved to be Arctic Terns. Sandwich Terns, Kittiwakes, Common Scoters and Red-throated Divers trickled through along with several small parties of Shelducks, Shovelers, Sanderlings, Whimbrels and Turnstones, a Fulmar, two Pintails, a Greenshank, 10 Med Gulls, three Black and five Little Terns and a few inbound Swallows. A full account of today`s proceedings will be posted on trektellen later.