Dengemarsh - 0730hrs - warm, dry, sunny, light airs - Infact, the perfect weather conditions for a two hour circuit of the marsh, with not another human being anywhere, apart from the Grid linesmen hollering away from their cradles! Cutting across the farmland track two Corn Buntings sang from fence posts while several Yellow Wagtails flashed across the corn fields. The ditches were full of Reed Warblers and Buntings and a Skylark sang overhead. By Badgers, Sedge and Cetti`s Warblers joined in, a Tree Sparrow chupped from cover and the first of many Hobbies and Marsh Harriers were on the wing. 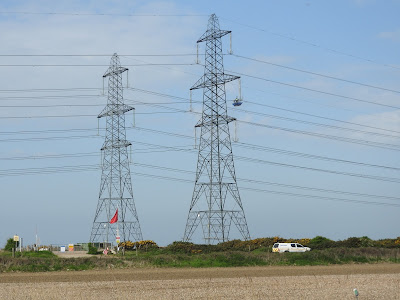 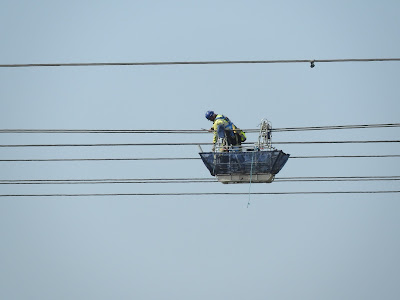 From the ramp a Bittern boomed, Bearded Tits pinged, Cuckoos called and a Greenshank went over unseen. Loads more warblers were in song as we moved round to the lake where Common Terns were coming and going. Across the still waters the presence of drake Pochard, Shoveler, Gadwall and Garganey all suggested that ducks were tucked up somewhere on nests. More Bearded Tits were heard, and seen from Springfield Bridge, and surprisingly a Water Rail. 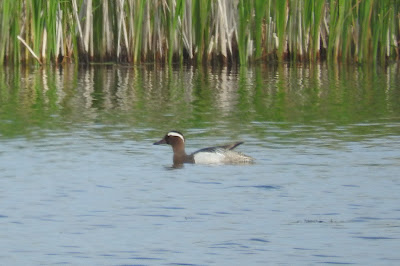 On the hayfields Redshank and Lapwings chicks were noted along with plenty of feral goslings (food for the foxes) and Cootlets, plus Grey Heron, Little Egret and Shelducks. On the shingle ridges at the back of hayfield 3 a Greenland Wheatear had dropped in en-route to the northern lands.
So, nothing much to write home about really! Or, as I`ve said many time before on this blog, we  take way too much fore granted down here.
Tavern Beach - A check of the beach in less than favourable light conditions, nonetheless delivered a decent crop of migrant waders including 15 Knots, 21 Barwits and a mixed bag of 50 Sanderling and Dunlins, many in nuptial plumage. However, bird of the day went to a stunning Little Tern feeding along the receding tide line.
Posted by Paul Trodd at 11:24