Hirundines and a Short-eared Owl

Saturday - Lade - 0700hts - cool, cloudy, ne 3 - Having neglected the local patch this past week it only seemed right and proper to spend Saturday morning mooching around checking on the breeding birds. However, the cool weather had driven down several hundred hirundines and Swifts to feed over south lake, so we got waylaid for a couple of pleasurable hours sifting through these tired migrants. Comprising mostly House Martins and Swallows the light conditions were ripe to find a red-rumper in their midst, but it was not to be. It didn't really matter though as sitting down on the lakeside bank, in the lee of the wind, watching these amazing creatures fluttering around and landing on the bushes nearby was satisfying enough. Every so often a group of Swallows would flop onto the shingle to seek warmth from the stones warmed by shards of sunlight poking through the clouds. Fabulous stuff. 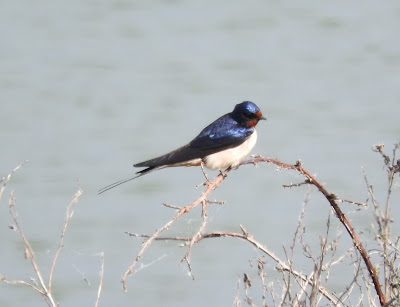 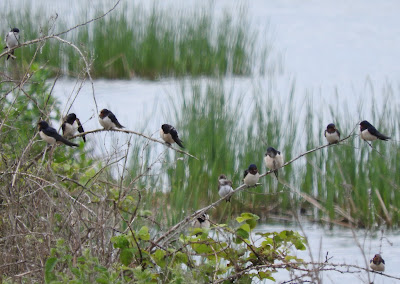 As for the breeding birds, Whitethroat, Reed, Sedge, and Cetti`s Warblers were all recorded in good numbers, plus Cuckoo, Stonechat and Green Woodpecker along with double figures of Little and Great Crested Grebes on the water.
All was quiet in Kerton Road pit with no sign of any Black-headed Gulls this year due to thick vegetation on their former nesting island. A few Shelducks and Oystercatchers were present around the quarry and a Common Sandpiper flitted over the lake.
ARC/Tower Pits - On the way back from the allotment this afternoon we strolled down to the pines with SB checking the many hirundines and Swifts overhead along with several Hobbies.

Sunday - Lade - 0800hrs - cool, sunshine, se 2 - The wind backed off this morning bringing a warmer feel to the day with sparkling light over the gravel pit lakes. The only noteworthy bird was a Short-eared Owl over Mockmill being mobbed by four crows. Walking back along the beach 20 Grey Plovers, 50 Knots and 25 Barwits were amongst the Oystercatchers and Curlews on the sands.
At around 1230hrs whilst working in the garden the Herring Gulls alerted me to a high northbound  Red Kite.
Posted by Paul Trodd at 12:00