Lade - overcast, rain, n 5 - A turbulent period of weather to say the least with a blasting wind out of the north forcing down hundreds of Swifts to feed low over the lakes, accompanied by a host of House Martins and Swallows. Apart from the aerial masters there was little change from last week, although few song birds were noted due to the wind strength.
Another check in the afternoon produced similar fare apart from a few more House Martins. On the water the first stripy juvenile Dabchicks and Great Crested Grebes were on show, while a Cuckoo called from the willow swamp. 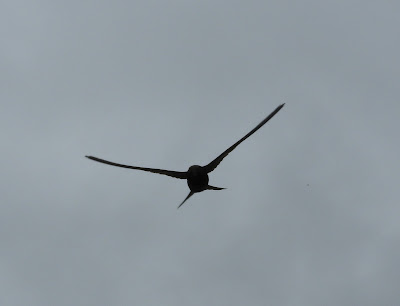 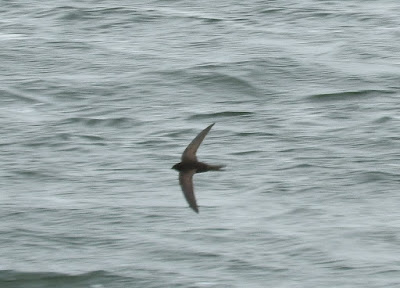 Dungeness We joined DW and PB in the Patch hide, sheltered from the blustery wind, where there was a steady trickle of Gannets offshore; the mass of terns over the boil included several hundred Common Terns, three Little and two Black Terns. However, on the beach amongst the Herring Gulls was a white-winged gull, which at first glance suggested Glaucous Gull on the bill length and pattern alone, but on closer inspection, and having studied the pics below, perhaps not...
On the evidence of even my ropey snaps our bird is clearly nearer Herring Gull size and has an extensive primary projection overlapping the tail, which points more towards an Iceland. Also the head appears more rounded and gentle looking, and quite unlike the flatter, meaner looking Glaucous; although whether the bill is shorter than the primary projection is open to conjecture. On the plumage front the bird appears to be in its second calendar year or 1st summer. It`s certainly an odd looking individual and may, of course, be some sort of hybrid, perhaps a Glaucous x Iceland... 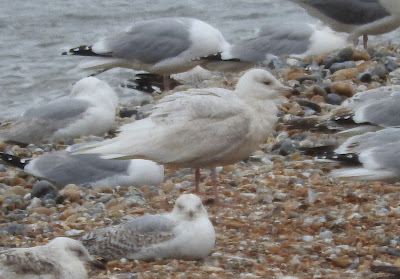 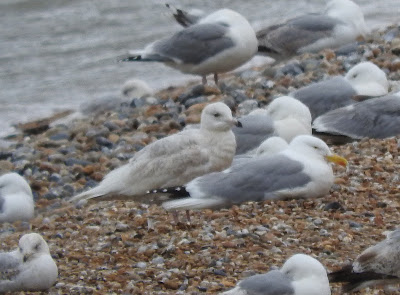 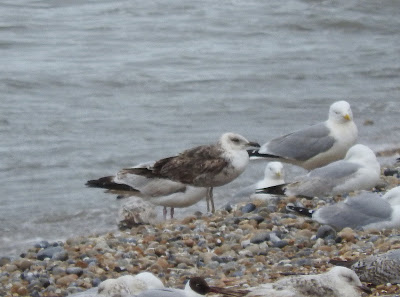 And while we`re on the subject of confusing immature gulls DW commented on the Lesser Black-backed type beast above, also a 2nd year bird and a likely candidate for Baltic Gull due to the state of moult and whitish head and breast; although what an intermediate between Baltic and British race bird looks like I`m unsure. Confused? Join the club!
Burrowes - Hundreds more Swifts here, plus a Whimbrel over and all the usual wildfowl on the islands including a pair of Wigeon.
Posted by Paul Trodd at 09:54