Lade - cool and cloudy, showery, SW2 - We trudged around the local patch in a fine drizzle getting a right good soaking from the lush vegetation as all the pathways were choked with drooping grasses and bramble runners. Adult Cuckoos were still active around the willow swamp, but not for much longer I suspect as this African bird will soon depart south for warmer climes. A few Swifts dipped in and out over south lake where Pochard numbers had increased to 110 along with a handful each of Shoveler and Gadwall. On the ebb tide Curlews had also increased on the bay sands this afternoon to 132 birds. The garden moth trap continues to be poor with only 12 species this morning, but did include a Dark Spectacle (thanks to Steve G) which was new for the trap site. 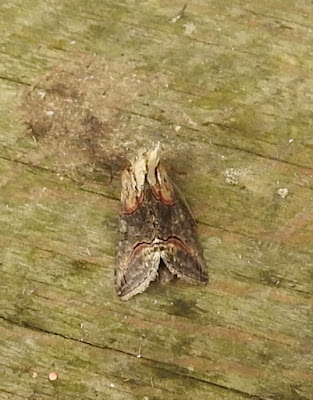 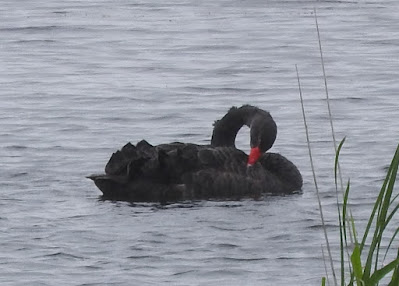 A tour of the bird reserve produced the expected Glossy Ibis on ARC along with hundreds more Pochard, Gadwall, Mallard, Tufted Duck, Shoveler and Teal in eclipse plumage, scores of Swifts and hirundines over the lake, 30 Lapwings, 20 Common Terns and a Cuckoo calling from Tower Pits. On Burrowes the Common Tern colony continue to valiantly defend their nests from the neighbouring  Herring Gulls, although I fear for the terns` first attempts with so many ravenous juvenile gulls to feed. The sum total of waders during the circular walk was: four Ringed Plovers (a pair on the shingle near the car park acted as though they had chicks nearby), a pair of Oystercatchers and a Green Sandpiper on the hayfields, 30 Lapwings and two Redshanks on the Dengemarsh fields. Also noted, a Black Swan, two Great White Egrets, two Marsh Harrier, Bearded Tits and a Kingfisher from the ramp;10 Teal and four Shoveler also on the hayfields.