Lade - warm, dry and sunny, SW 2 - A muggy start to the day that got hotter as the sun broke through the early morning cloud. On the local patch plenty of activity on the shingle ridges with hundreds of House Sparrows, Starlings and Jackdaws feeding on invertebrates. A search for Bee Orchids in the usual spot revealed three plants, one in full flower, although there was no sign of any Southern Marsh Orchids. 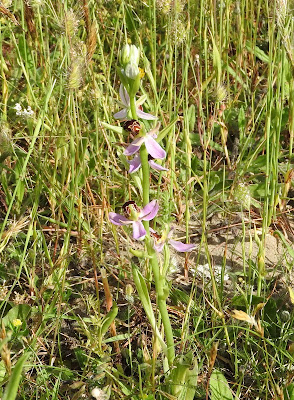 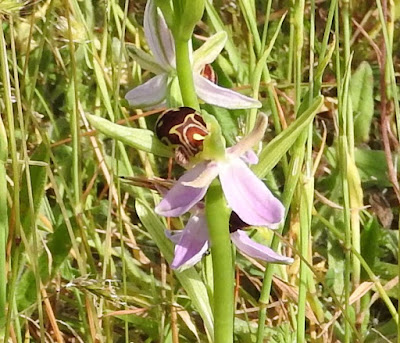 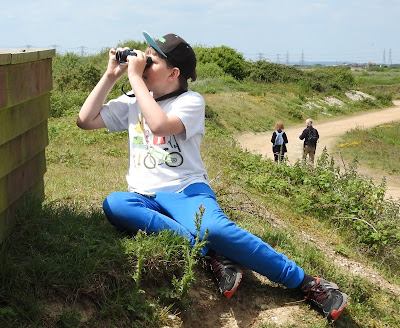 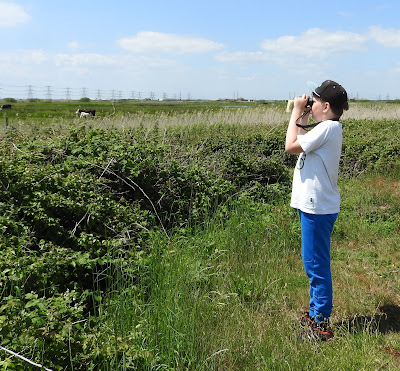 Apprentice birder scanning Burrowes and the Hayfields
This afternoon I spent three hours on the circular route around the bird reserve with my apprentice birder (ten year old grandson) who diligently tallied up the species as only a youngster can! We eventually reached 62 species, which was something of a surprise considering the time of year and hot weather. The highlights were: eight summer plum Dunlins, 50 Common Terns and a Kingfisher on Burrowes; a Green Sandpiper on Hayfield 2 (hello autumn!); three showy Hobbies and a male Marsh Harrier over Hookers; two Great White Egrets and a Yellow Wagtail, Dengemarsh; and a cracking heavily barred, dark Honey Buzzard over Boulderwall fields being mobbed by Lapwings that flew towards the power station. We searched for the reported Red-backed Shrike and Collared Pratincole from the back track to Lydd without success; but there were no complaints from the apprentice, particularly as the Honey showed so well and was new for his life list!
Posted by Paul Trodd at 09:57