Lade - fog, warm, dry and sunny later, light airs - I awoke early this morning to check the beach only to be confronted by a thick sea fret smothering the coastal strip, so ended up sitting in the garden with a cup of tea and listening for any birds on the move in the swirling mist, of which there was just the usual common shorebirds. By mid-morning the murk eventually burnt off enabling a circuit of the local patch where a flyover Raven was the only bird of any note apart from the usual breeders. 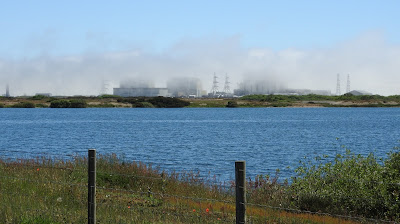 Sea fret over the power station

News from the bird reserve was even more astonishing as a third Collared Pratincole joined yesterdays pair at the Dengemarsh wetlands; how on earth did it find the others! When I called in this afternoon the trio were flying around over the Gun Club/Corral area of Dengemarsh hawking insects and looking perfectly at home.