Lade - overcast, dry, nw 2 - Another muggy night perfect for moths coming to light, which they did in good numbers. However, the last one out of the trap was a very distinctive looking, largish mainly black and white moth who`s identity initially had me stumped as it wasn't in the Lewington guide. After a consultation with the Kerton Road Café I felt somewhat foolish as it was obviously a species I should`ve known; a Box-tree Moth, a so-called `pest species` (although in my opinion the only pest species on this planet is Homo sapiens) accidently imported from south-east Asia on Box plants, upon which it feeds. Apparently, the first British record was as recently as 2007 in Kent, while there are less than 10 Dungeness area records, so pretty scarce, at least for now! 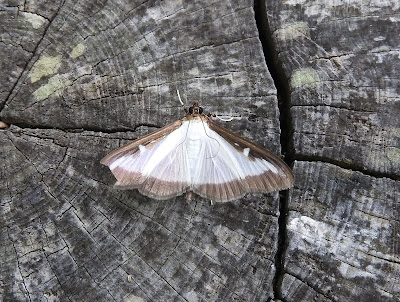 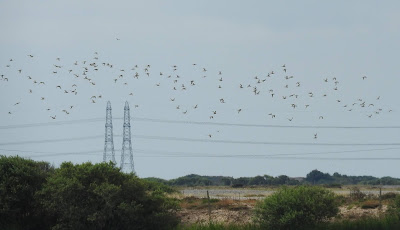 Our morning perambulation around the local patch was full of interest with scores of warblers, tits and finches again feeding by the ponds. Couldn`t make out anything unusual among the warblers which comprised mostly Common Whitethroats and Reed Warblers and one or two Blackcaps, Sedge, Willow and Cetti`s Warblers. On south lake a Common Sandpiper was still present.
Best of all though was the spectacle of the brown wader flock coming off the bay for the high tide roost on the Desert. As they swept overhead and flew over the shingle ridges looking for a safe landing site it enabled a reasonably accurate count of 185 Curlews, 12 Bar-tailed Godwits and a lone calling Whimbrel, our first of the return passage.
On the bay this evening on the incoming tide, 29 summer plumage Dunlins, 120 Oystercatchers and two Ringed Plovers, while a brilliant cock Linnet posed nicely atop a frond of Sea Kale. 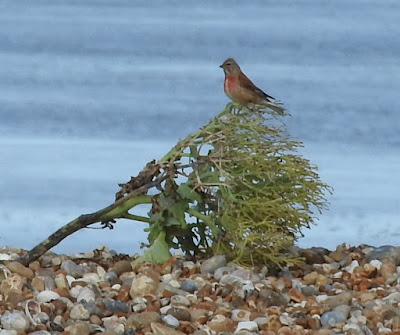