In praise of Swifts

Lade - cool, cloudy, drizzle, sw 6 - A miserable weekend of weather with low cloud and drizzle throughout. The main feature being an unseasonably strong wind whipping up-Channel off the ocean, gusting to gale force at times, but at least the sun broke through by late morning today. Needless to say the garden moth trap remained covered all weekend.
On the local patch hundreds of Swifts made for an impressive spectacle barrelling in from the north and briefly feeding over the lakes before heading back out again; at one stage I counted 150 in a tight flock over the back end of north lake, but there must`ve been thousands through the peninsula this weekend. They truly are remarkable birds to watch, but I did wonder how many of them were foraging for nestlings as opposed to failed breeders on the move back south along with immatures on a dry run. 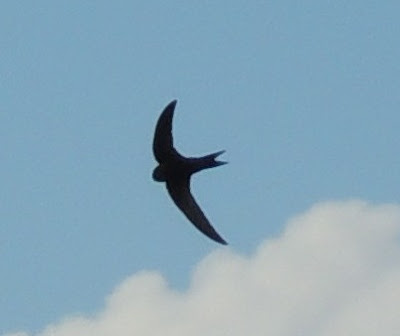 So let`s consider their breeding cycle for a moment. The majority of Swifts tend to arrive on our shores throughout May, and let`s say that a pair got together sharpish and produced a clutch of eggs by the end of the month (which is tight) in a loft space somewhere here in the south-east or northern France. The incubation period is about three weeks, which brings the earliest hatchlings out by, say mid-June, and then it takes anything between five and eight weeks, depending on the weather, before the nestlings finally tumble out of the nest, which brings us to late July/early August. Hang on though, that`s still a month away? So, we can only hope that most of these birds are foraging adults that will return to rooftop nest sites to feed nestlings; although I do suspect that some probably haven't bred this summer due to a lack of food. We shall never know, of course, but its a good job that the Swift is a long-lived bird (up to 20 years) and can continue to sustain its population by missing the odd year or two. 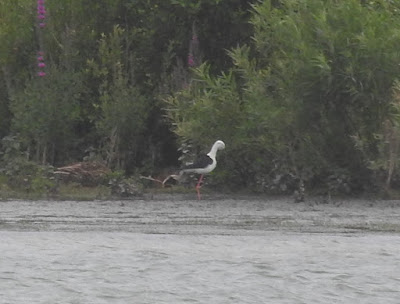 Stilt sheltering from the wind

Yesterday afternoon we had a run out to ARC where the Black-winged Stilt was hunkered down out of the wind in the water tower corner, along with several Lapwings and a Dunlin. Hundreds more Swifts and martins swarmed over the lake which was covered in Pochards, grebes and Coots, plus Common Terns feeding young on the raft and seven distant Little Egrets on the far bank, also sheltering from the tempest.
Moving onto Dungeness and an hour outside the seawatch hide delivered a steady showing of Gannets and a few Common Terns, plus a pale phase Arctic Skua, while the summer`s first Balearic Shearwater was reported just before I arrived.