Lade - mild, cloudy, nw 3 - The past few days have been dominated by gloomy weather with low cloud, light drizzle and gusty winds at times, although it did improve throughout today. So, far from ideal conditions for fledgling birds then, although juvenile Whitethroats and Reed Warblers have been noted around the more sheltered ponds on the local patch. On the water Coot, Mallard, Mute Swan and Dabchick have all produced young, but I`ve yet to see any juv Great Crested Grebes despite there being around 25 pairs of adults present across both waters. Little Egret and Marsh Harrier are regular visitors hunting the wetlands and the Oystercatcher pair are still feeding a juv on the scaffold island. Large flocks of Jackdaws, House Sparrows and Starlings are ranging across the shingle ridges searching for emerging insects, while small parties of Swifts and Sand Martins are also pausing to feed awhile before heading south on their return migrations.
Elsewhere, the Black-winged Stilt remains faithful to the north-west corner of ARC and a Cattle Egret paid a visit to Dengemarsh yesterday (MC). Other waders just about viewable this week on ARC have included Greenshank, Black-tailed Godwit, Dunlin, Redshank and Common Sandpiper. Common Terns are feeding well grown chicks on the raft, although a brood of hungry Herring Gulls nearby doesn't bode well. Black-headed Gulls and Cormorants have also bred around ARC this year. Quite why the Screen hide is barricaded and boarded up is a mystery to me as social distancing could easily be employed with the flaps left permanently up, particularly as most of the back of the hide is open to the elements; infact there`s a far greater risk of death or injury from pulling out of the ARC car park onto the speed track that is the Dungeness Road than catching Covid-19 in the Screen hide.
Afternoon seawatching has been pretty quiet this week with just a trickle of Common and Sandwich Terns, Mediterranean Gulls and Gannets through, plus the occasional Arctic Skua, Manx Shearwater and Bonxie, and Yellow-legged Gulls at the Patch. One or two Grey Seals (four in the bay on the outgoing tide this afternoon) and Harbour Porpoises have been noted offshore and a flock of 20 Common Scoters have been moving between the two bays. 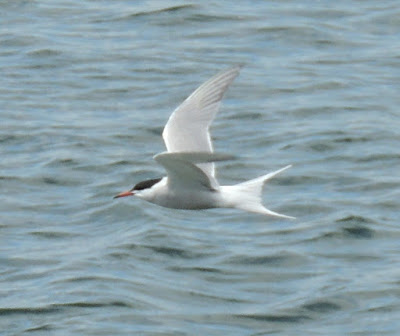