West Wood, Rhodes Minnis - warm, dry and cloudy - A humid morning for a walk in the woods on the North Downs where the main avian interest was at least 30 Crossbills in three parties `jipping` wildly over the canopy. I was not surprised to see such numbers considering how many have been reported coming in off the North Sea along the east coast of England of late, and would suspect that there were many more scattered across this large block of mainly coniferous woodland. Also noted, Blackcap, Chiffchaff, Coal Tit, Treecreeper, Goldcrest and Buzzard.
Some of the broader rides were covered in woodland flowers that in turn attracted a limited range of butterflies, nothing much of note although it was good to see plenty of Ringlets. 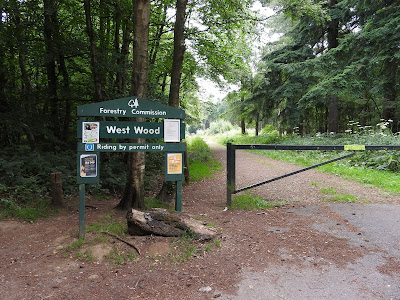 
Meanwhile, back on the Marsh the Black-winged Stilt was still present on ARC along with a Black Tern, Common Sandpiper and Garganey. On the bay this evening the Curlew count reached 210.
Posted by Paul Trodd at 11:57