Dungeness RSPB - warm, dry and sunny, sw 3 - After our circuit of the local patch and breakfast it was down to the bird reserve for a circuit of the recently opened two mile trail that has been closed since late March. Along with the main car park and toilets it is now open from 10am -5pm, Thursday, Friday, Saturday and Sunday only (entrance via a gazebo with a member of staff present) but the hides remain closed. The ARC car park remains open daily from 9am - 5pm, while all the public bridleways and footpaths across Dengemarsh remain accessible at any time. 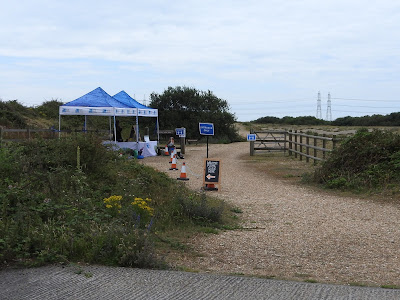 Gazebo entrance to the main trail 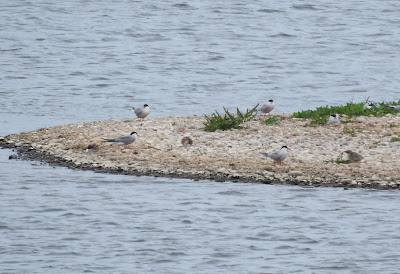 Burrowes can be viewed from either side of Dennis`s and Makepeace hides where waders noted included, Lapwings, Oystercatchers, Green and Common Sandpipers, two Golden Plovers and a Dunlin, plus a Garganey amongst hundreds of ducks, grebes and Coots. The Common Tern colony that was ousted by Herring Gulls from the rafts a month or more ago have decamped to two of the shingle islands where I counted at least 23 fledglings, but I`m sure there were more hunkered down and hopefully others still about to hatch. Unfortunately, also present were over 30 juvenile Herring Gulls scattered across the rest of the pit and one brood of Lesser Blacks, so it will be a miracle if any of the terns survive. Around the circular route plenty of Sedge, Reed and Cetti`s Warblers, Whitethroats, a few Willow Warblers, two Great White and five Little Egrets, Hobby, three Marsh Harriers and two Ravens.
Over on ARC the Black-winged Stilt was still present in front of Hanson hide, having been there now since mid-summers day, plus Black Tern, Black-tailed Godwit, Garganey and all the usual wildfowl and hundreds of Sand Martins.
On the bay this evening another whopping great flock of 350 plus Dunlins. 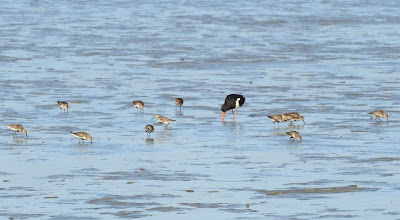 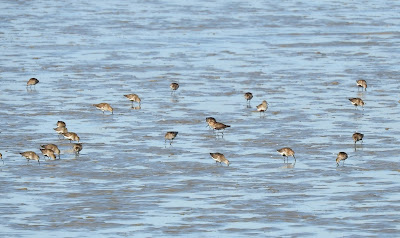 Adult Dunlins on the bay
Posted by Paul Trodd at 12:29