Lade - cold, cloudy, N 3 - Another cold day with a wind out of the north that seemed entirely appropriate for the polar gulls that have been attracted to the marine carrion washed up around the shingle cuspate of late. On Wednesday DS found a 2nd winter Iceland Gull on the sea opposite Derville Road, the bird that`s been in regular attendance at the Patch for a while now. Dave also located and photographed another `white-winger` on the sea that flew past me mid-afternoon en-route towards Dungeness. It was a large, very `white-winged gull` and appeared at first glance to be a Glaucous Gull, but didn`t look quite right. However, DW saw it later at the Patch and flagged up the tiny patches of brown on the outer primaries and the overall structure being wrong for Glaucous; also, the pic below shows the bill is too short for Glauc which points towards a Herring Gull of the leucistic variety, although if anyone has a differing take on it please fire away.

Brown on the outer primary tips 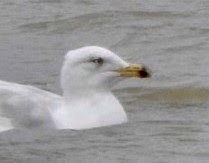 The tons of beached shellfish has also attracted many thousands of Black-headed, Herring and Common Gulls along with hundreds of Black-backs and Mediterranean Gulls and a few Kittiwakes, Yellow-legged and Caspian Gulls, and a Glaucous Gull over last weekend opposite the lifeboat station. On the bird reserve a Kumlein`s Gull has been coming into the evening gull roost on Burrowes, where a Little Gull was also seen yesterday completing an impressive suite of gulls noted across Dungeness this past week or so. 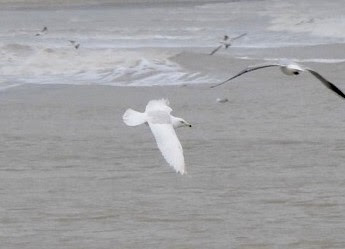 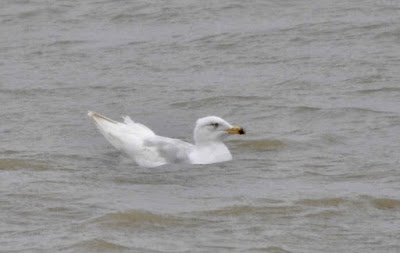 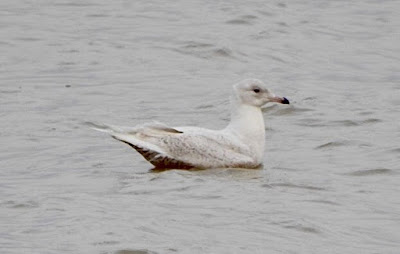