Lade - cold, dry and cloudy, NE 2 - The past week on the local patch has been pretty much a case of slow birding with wildfowl numbers at their annual low point (five Goldeneyes still present though) and just the resident passerines such as Cetti`s Warbler, Dunnock, Greenfinch and Long-tailed Tit making an effort through song to hold breeding territories and remind us that spring is just around the corner; there have been no more early migrants to lift the spirits. With, at times, a brisk wind coming in off the bay and afternoon high tides I tried a couple of seawatches from the boardwalk, but without much success apart from a few distant Gannets, Cormorants, large gulls and auks crossing the bay, plus a group of 12 Brents on one occasion heading towards the White Cliffs. At low tide this morning a Sanderling proved particularly confiding. 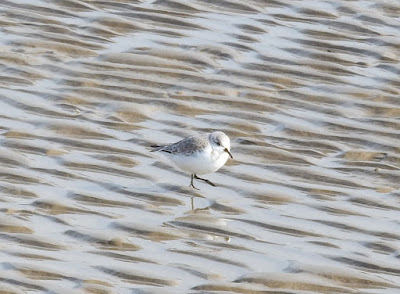 This morning`s Sanderling on the beach 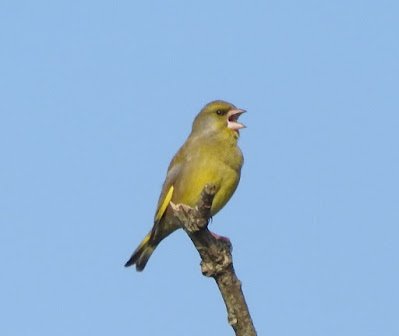 Cock Greenfinch in full song by the ponds

Elsewhere, we had cracking views of a Barn Owl overflying the ARC car park this week (at 10am) en-route to hunting the fields behind Tower Pits, while around 100 Greenland White-fronts are still on the fields towards Lydd. This afternoon a check of the Boulderwall fields and wetlands revealed the usual flock of Wigeon, two Curlews, two Snipe, Shelduck, Great White Egret, two Marsh Harriers, a Black Swan and four White Wagtails around the margins of Gun Club pool. A look at Burrowes one afternoon produced hundreds of gulls, Cormorants and common wildfowl, including five Goldeneyes. The wintering Iceland Gull was also noted on Burrowes during the week, no doubt having strayed from its usual haunt at the Patch, and a Woodlark was ringed at DBO.

PS: As a rule I don`t normally watch the BBC`s Countryfile but when I saw that it was going to feature The Colne Valley Regional Park last night I made an exception. I spent my formative years growing up in the village of Maple Cross (roughly at the centre point of the Park) and knew every inch of the adjacent river valley with its water cress beds and gravel pits, and woods, orchards and scattered farms set amongst the gentle rolling hills of the Chilterns. The programme homed in on Woodoaks Farm a place I have fond memories of and where as a nipper I used to plant spuds for 15 shillings a day with 20 other kids in our Easter school holidays; the farmer, John Findlay, always insisted that we were the last children, "to plant tatters by hand in England"! That was back in 1969 and much has changed since with the M25 now bisecting the farmland and more recently the building of a secondary school rendering the farm unviable as a business. They interviewed the farmer`s wife Sally who told of the changing times; the dairy herd and pig unit are long gone to be replaced by a cafe and artisan brewery, although the remaining arable land was still contracted out for wheat and barley. It was a strange feeling to see the camera sweep around the old farmyard and past the Tudor Barn, so many memories and, perhaps, a salutary reminder that nothing lasts forever...