Lade - 0730hrs - cool, sunny, w 2 - A stunning morning with a bright blue sky and pin-sharp light, ideal for a circuit of the local patch to check on the breeding birds. The rufous female Cuckoo was glimpsed again in the willow swamp where I`m pretty sure a Chiffchaff is holding territory, which is not a regular breeder down here. Med Gulls were heard almost constantly throughout the day, flying over high, and were not the local birds, but maybe failed breeders dispersing from Rye/Pett way. Mockmill sewer was jumping with Sedge and Reed Warblers, Whitethroats, Linnets and a pair of Stonechats, but Mipits appear to be down in number this spring with only a couple of pairs on site.
The recent rain has resulted in a lush growth of plants on the shingle ridges with the yellow prostrate broom rapidly replacing the fading gorse blooms and foxgloves springing up from the turf. The number of flying insects emerging from this herbicide free sward has to be seen to be believed.
Cutting back along the beach a pair of Ringed Plovers were located giving the old broken-wing distraction display and I could just about make out a chick hunkered down under a clump of sea kale. The chick was only a few days old and hopefully there were others nearby and they can avoid the privations of Herring Gulls and out of control dogs, or their owners. 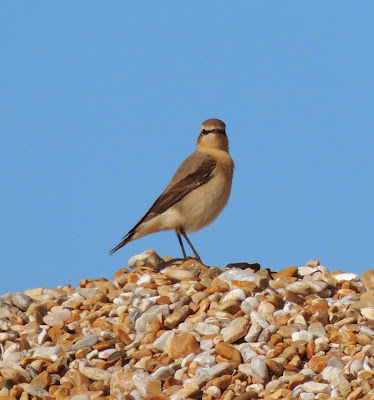 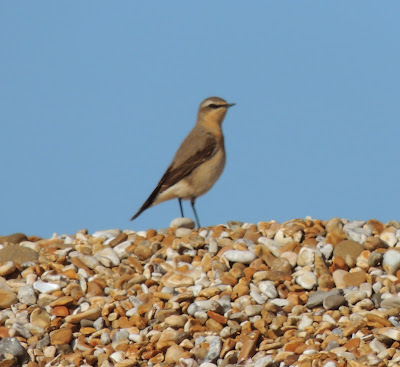 
The only true migrant noted this morning was a stunning male Greenland Wheatear on the beach, etched against an azure sky and a typical date for this Arctic bound long-distance traveller.
On the down side I`ve run out of adjectives to describe how dire the moth trapping has been so far this year, what with the cold nights and blasting winds, so I`ll say no more until the situation improves...
Posted by Paul Trodd at 10:58