Dengemarsh - 0700hrs - cold, sunny, nw 3 - Spent most of the  morning surveying Dengemarsh and the surrounding area for RSPB in weather more akin to March than May. On the hayfields nine Ringed and two Little Ringed Plovers, four Dunlins, two Avocets, six Redshanks, 15 Lapwings and a Blackwit, coming and going, plus the usual Shelducks, Grey Herons, Little Egrets and feral geese, including four Egyptians. Three Lapwing chicks were seen, but up to 20 crows were active with several broken duck eggs and one snatched Greylag gosling noted and dispatched. The Common Terns are now restricted to a single raft in front of the hide, the other two having been commandeered by Common Gulls. The male Marsh Harrier was bringing in food regularly, while a Bittern `boomed` throughout and was also seen briefly in flight, thanks to a shout from PB. At least six Hobbies eventually got into the air by mid-morning to hunt insects along with Swifts and hirundines, and three Common Buzzards soared over along with six Med Gulls.
Despite the cold, Sedge and Reed Warblers, Reed Buntings and Whitethroats were everywhere in song. Also noted Pochard, Shoveler, Teal, Kestrel, Cuckoo, Green Woodpecker, Yellow Wagtail, Chiffchaff, Lesser Whitethroat, Bearded Tit and Tree Sparrow. 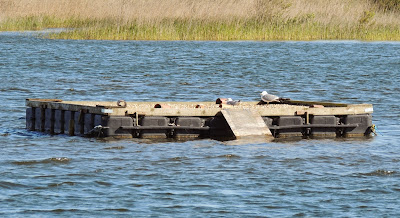 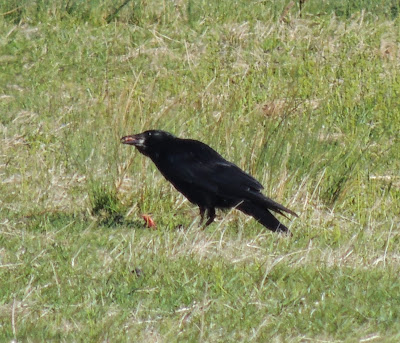 Crow tucking into a Greylag gosling 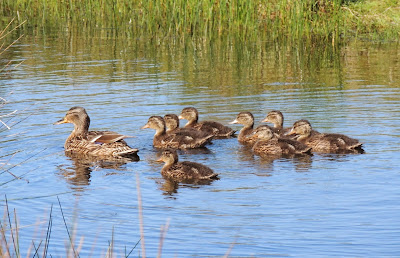 Dungeness - 1400hrs - This afternoon news came through from DB of a Nuthatch that came in from the east and settled briefly on a power line pole in a private garden. It then headed off north and despite further searching was not relocated, although it quite likely diverted into the Trapping Area. Nuthatches are rare hereabouts and this is only the second one I`ve heard of in ten years.
Posted by Paul Trodd at 10:44