Lade - The past two days have been like living in a wind tunnel with a cool, and at times gusting to near gale force westerly, blasting across the flatlands with a band of rain yesterday and some vicious hail and rain showers today. What effect this is having on our breeding birds, particularly the warblers, I dread to think.
I spent some time this afternoon, in between the showers, checking the sheltered ponds for damsels, butterflies and the like, but there were few insects on the wing. However, plant growth had pushed on due to the recent rain and plenty of young marsh frogs were sat in the water weed. A trickle of hirundines and Swifts passed overhead and I had another brief glimpse of the rufous Cuckoo yesterday.
Once again the moth trapping continues to be pitiful due to the weather. 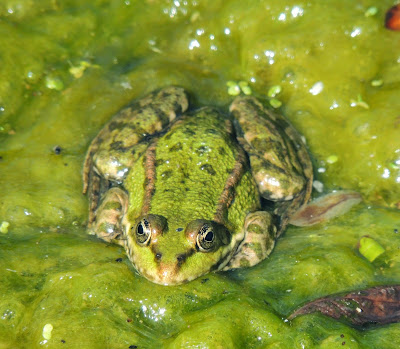 Spring Summary
As we move into the second half of May spring migration, such as it was, has all but petered out, although there is always the chance of something rare from the south or east, such as a Squacco or Red-foot, particularly this coming Bank Holiday weekend with an influx of birders around the peninsula.
Looking back March started off well with Sand Martin and Wheatear on 9th and 11th respectively, followed by a trickle of Black Redstarts, Firecrests and Chiffchaffs, plus a few finches and winter thrushes, an early Willow Warbler at Lade on 27th and the first Swallow at Dungeness on 31st.
By and large April was disappointing on the land with many days of clear cold nights and strong north-easterlies resulting in most migrants simply passing straight over us and inland. However, the 13th will be remembered for a large fall of Blackcaps and Willow Warblers at Dungeness, plus a few Redstarts, Tree Pipits, Ring Ouzels and singles of Pied Flycatcher and Woodlark. Scarcities in April included a Hoopoe on the bird reserve, a Wryneck at the point and flyover Osprey and Red Kites.
Into May and Whitethroats, Reed and Sedge Warblers eventually arrived in good numbers along with Swifts and more hirundines, while Whinchat, Spotted Flycatcher and Turtle Dove were once again in single figures. Many scarce migrants in May such as Crane, Osprey, Purple Heron, Melodious Warbler, Montague`s Harrier and Golden Oriole were single observer sightings or moved through quickly, with the undoubted highlight being an adult Bonaparte`s Gull on Burrowes and only the third Dungeness record. For many birders though, myself included, a pair of White-winged Black Terns in full breeding plumage that graced the bird reserve for two days were the birds of the spring.
As for the sea it was generally considered to have been a poor year and although there was a wide variety of passage seabirds numbers were low, particularly Pomarine Skuas which appeared on only five dates between 26th April - 11th May numbering just 18 individuals. However, a trickle of Black-throated Divers and a Great Northern Diver moved up-Channel, while an Iceland Gull was seen on several dates. Some decent movements of Commic Terns and Brents were noted, but numbers of waders and ducks were down.
This is only a snap look back at the spring, mostly from memory (always a bad idea!), so hardly exhaustive and hopefully there are one or two bits and pieces to come, perhaps a decent wader, now that would be good...
Posted by Paul Trodd at 11:47