Lade - 0930hrs - warm, dry and sunny, ne 2 - Following the monsoon of yesterday, warm sunshine and light airs this morning brought the birds out with Whitethroats and Linnets particularly prominent, singing atop the storm beach scrub. Over south lake a couple of hundred hirundines (mainly Swallows) and Swifts hawked insects while many more were grounded on the shingle and perched on overhead wires. Several hundred more Swallows moved straight through heading north. On the raptor front, Marsh Harrier, Sparrowhawk and Kestrel all noted, plus Cuckoo, Little Egret and Green Woodpecker. 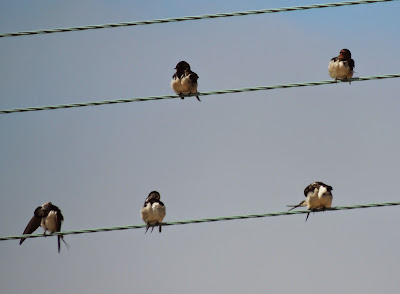 Dungeness - 1500hrs - With the wind veering to the fabled south-east we spent an hour seawatching from the hide, and sea was just about all we saw, if you catch my drift...
Burrowes - Joined SG and DW checking through hundreds more hirundines from Dennis`s hide, but to no avail, great sight though as they rose up and down, en-masse, every so often. There was no sign of the White-winged Black Terns, which were present earlier in the afternoon, but by 1900hrs they had returned (PB); they had also been seen over Dengemarsh.
Posted by Paul Trodd at 09:48