Lade - warm, dry, sunny, nw 2 - Its been a busy Bank Holiday weekend down here with guests coming and going and not much time to get into the field. When we have we`ve stayed local, checking the gravel pits yesterday where the Black-headed Gull colony was full of activity and Meds still present and the high tide wader count comprised 52 Curlews and 130 Oystercatchers. A second pair of Stonechats appear to have set up a territory near south lake, while on the beach this morning a flock of 12 Knots, half of them in summer plum, was a sight for sore eyes.
As for the garden moth trap, I`m pleased to report that things have picked up with 10 NFYs over the weekend including Cream-spot Tiger, White-point. Broad-barred White and Knot Grass. 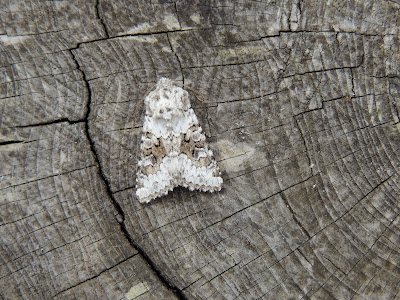 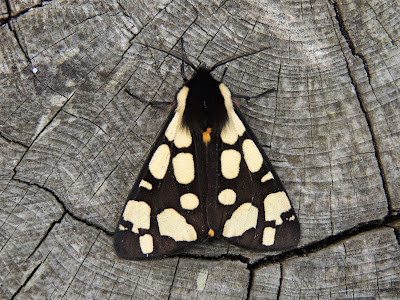 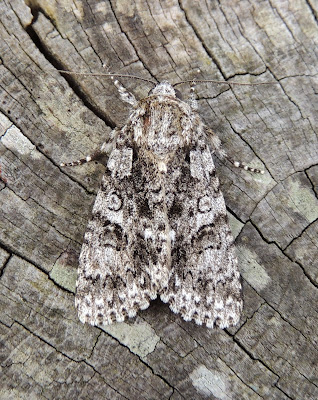 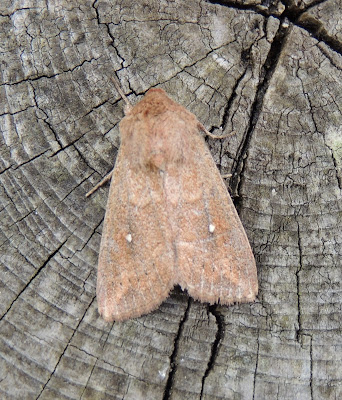 Springwatch 2015
In a moment of optimistic madness last night I tuned into the first Springwatch of the season, just to see what`s on offer and whether or not they`ve bucked their ideas up and changed the presentation style at all. Once again they`ve pitched up at Maasai Minsmere complete with a crew of 120 people and 30 cameras around the site.
Sadly, I can report that its the same old Tomfoolery from the usual trio, holding court as though the viewing public is a CBeebies audience. Shame really, because the concept is great and there were one or two interesting items, particularly on Crested Newts and time lapse photography, and I feel sure there will be plenty more good stuff to come from the Northern Isles with Iolo Williams, but it went rapidly downhill for me when they held this ludicrous agility and speed test between a captive Gos and Sparrowhawk. Then there was all the palaver over the new fence (which must`ve cost a fortune to install) to prevent Badgers getting onto the scrape and steamrollering the Avocet nests; I`ll lay money on the buggers breaching the barricade somehow during the next three weeks - there`s only one way to deal with a persistent Badger...
And another thing, its supposed to be a dynamic `live show`, right? Well, while his nibs was prattling on giving a Stickleback a daft name there was a Bittern `booming` loudly in the background, surely he heard it. Any minute now I thought he`s going to give us the speel on the old boomer, but no he completely ignored it, despite returning once more later on; which just goes to prove that the show is so tightly scripted that you can ignore the bleeding obvious.
Anyhow, that`s me done with it, that lot really wind me up, so I`m staging a one man boycott until they employ all three presenters with an underpinning knowledge of natural history and stop performing like a bunch of kids.

Lade - 1930hrs - A gorgeous evening for a walk along the beach, on an ebb tide, yielded some smart  Arctic waders on the sands in breeding plumage including 15 Barwits, 40 Dunlins, 21 Sanderlings and two stunning Grey Plovers, plus Sandwich Terns and two each of Med Gull and Shelduck. The sea kale is now in full flower along this section of the beach and looks a real treat.
Posted by Paul Trodd at 11:29