Dungeness RSPB - 0830hrs  - mild, cloudy, sw 2 -  Spent some time this morning surveying the bird reserve for breeding waders, particularly plovers. Cook`s and Gun Club pools held the expected Little Egrets, Grey Herons and a Great White Egret while it was good to find several pairs of Yellow Wagtails, Skylarks and Lapwings in adjacent corn fields. Sedge and Reed Warblers and Reed Buntings were all over the place and two hares bounded from cover. Marsh Harrier, Kestrel and Sparrowhawk all noted. By the corral two Peregrines flew over and one was carrying a large prey item, probably a duck or hen pheasant. 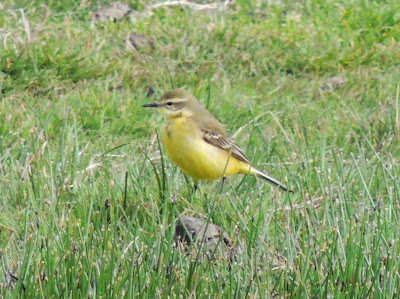 ARC -  This afternoon a bank of fog rolled in off the sea dropping the temperature accordingly. We surveyed the back of ARC and around Tower Pits where there was little of note. A few Swifts dropped in and two Hobbies were grounded out on the Desert.
Posted by Paul Trodd at 10:39