A trip down memory lane

Lade - cold, dry, ne 5 - The past couple of days has seen the return of the `beast from the east` with a rasping north-easterly wind scouring the shingle and making for difficult birding. To be honest if it wasn't for Barney pleading to be taken for a walk (he loves dry, cold weather) I would probably have slobbed out over the weekend. However, we did make the effort and worked the local patch, although it has become a little samey with declining wildfowl numbers, and waders on the bay difficult to find as they move to the Littlestone end to avoid the kite surfers. Despite the bitter cold the airborne kites reached 35 in number around low tide yesterday, a hardy breed of folk indeed.
The Early Days
Anyhow, last October I reached the ripe old age of 60 and since then the family have been steadily nagging away suggesting that its about time I attempted to make some sort of sense from, `all those old log books and files cluttering up the bottom of the book case in the study`. So, being as its a quiet time of year with only a trickle of B&B guests coming and going and all my writing up to date, I grabbed a bundle and began delving back into the past.
I`ve always been a note taker and recorder ever since a nipper in my egging days, before I knew better, but as I recall those note books were donated to Tring Museum long ago together with my old egg collection. However, the earliest log book I could find amongst the bundle was a home made, string-bound affair covering 1967/8 entitled `wildlife at the hide` and was pretty basic stuff as I was only 11 years of age at the time. Together with my life-long pal Kevin Downer we built a hide from branches and ferns in a wood near our village and set up a feeding station so`s we could get close up views of the birds. The first entry was from 15th July 1967 - at 5.15am! Can you believe it, two 11 year old boys in a wood without an adult for miles around; that wouldn't happen today, which just goes to show how much freedom we had back then. 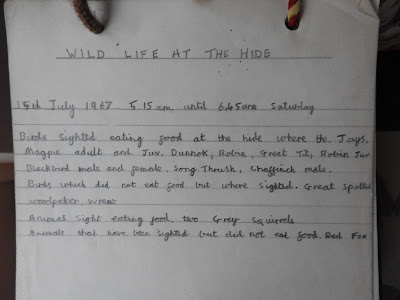 `Our village`, by the way, was Maple Cross in south-west Hertfordshire, set in the Colne Valley on the edge of the Chiltern Hills. It was a time before the M25 motorway blighted the place, a time when the hunt still met outside The Cross pub, a pub which was full of `characters` and when us village kids planted spuds by hand in the Easter holidays at the local farm for 15 bob (shillings) a day. An absolutely fantastic place to grow up if you were a country bumpkin and we milked it for all it was worth. From gravel pits and water cress beds in the river valley, to beech woods, orchards and dairy farms it was a haven for us kids and we had the time of our lives.
My birding interest ramped up a level in 1968 when I went to Rickmansworth Grammar School. Our biology teacher, Dr Bruce Ing, was a keen birdwatcher (there was no such thing as a birder back then) who`d been to Fair Isle and regaled us with stories of rare birds from the north. He also introduced me to the YOC, the junior wing of the RSPB, where I met Graham Clarke, known to everyone as Mutley. We hit it off straight away and together with KD the three of us were regulars at Tring reservoirs and various other local haunts such as Staines Reservoir and Perryoaks sewage farm.
About the same time a ringing station was established at Maple Cross sewage farm by Pete Deleloye where I also became involved as a trainee bird ringer.
Once the holidays came there was no holding us back and we regularly hitch hiked to north Norfolk, often via various sewage farms at Cambridge, Bedford or Wisbech. Cley was my favourite place though, where we either crashed in the old barn at the back of Walsey Hills or camped out rough. By the end of the decade we travelled further afield staying at Portland, Spurn and Dungeness Bird Observatories on occasions, but mostly sleeping under canvas to keep costs down.
But Cley was where I saw my first `dream birds` such as Bluethroat, Dotteral, Red-backed Shrike and experienced large falls of migrants at Blakeney Point. It was where I spent five consecutive summer holidays (and most of the half terms too) at the end of the 1960`s into the 70`s. We birded from dawn to dusk, sustained by slabs of bread pudding from Nancy`s café through the day, and pie and chips in the evening, followed by illicit pints of mild in either the George at Cley or the Dun Cow at Salthouse.
It was the era of R A Richardson who most mornings held court on the East Bank overlooking Arnold`s Marsh, and where I first met characters such as Spiney Norman, Bill Slater, the Midwich Cuckoos, Tim Lawrence, Ray Turley, Bill Oddie and Richard Millington to name but a few. Happy times indeed. 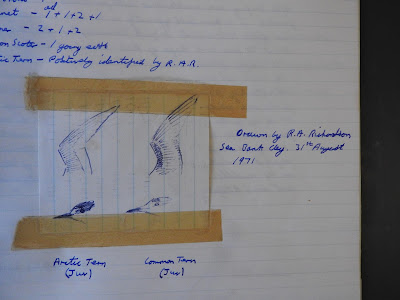 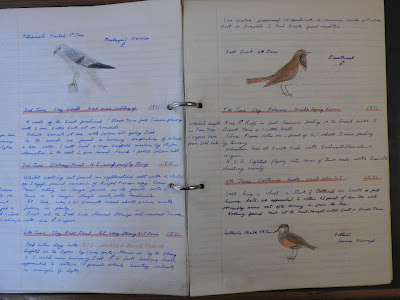