Lade - cold, grey, rain, e 5 - I suppose it had to happen at some stage this winter, the wind shifting round to a bitterly cold eastern direction, coming in straight off the North Sea from the Low Countries. With the combination of 4C, sleety rain and a blasting wind perhaps it wasn't the best day to be trudging around the local patch. On the lakes the Slavonian Grebe was absent and a redhead Smew had dropped in overnight on north lake, while head-shaking Great Crested Grebes and trilling Dabchicks seemed undeterred by the weather conditions from performing their nuptials.
The RSPB`s recent efforts certainly hadn't gone unnoticed by the locals and yesterday when I went round they all wanted to know what was going on. The old railway bridge is now cleared of rubbish and the proposal is to eventually make it into a kind of formal site entrance. 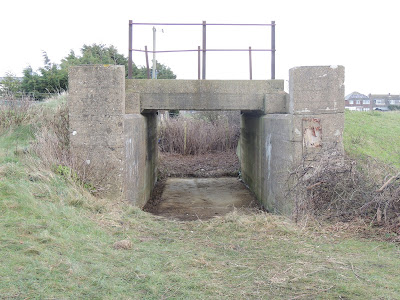 When the wind vector is anywhere between north and south-east the kite surfers move in and today was no different. As we walked down the beach three hardy (or mad!) souls were already flying along the tideline way out in the bay with more arriving throughout the morning. Chatting to one of the youngsters togging up in the car park he said it was the adrenalin that keeps them going once  airborne, but as soon as they land on a such a cold winters day as this one, out come the flasks of hot soup or tea. Oh, what it is to be young and invincible!
Anyhow, onto the subject of the unlikely post title, Singing Goldcrest. The past couple of weeks have seen a pair of Goldcrests take up residence in our garden Leylandiis and this morning the male was merrily singing away deep within the canopy, completely sheltered from the wind. It`s perhaps no surprise that one or two have stuck around this winter considering how many there were last autumn, so hopefully this pair will stay and be our first breeding record.
Dungeness - Our optimism was soon dashed when we arrived at the point with driving rain deterring us from even getting out of the car. A check of the beached gulls from the road revealed nothing unusual, but the regular 1st winter Glaucous Gull was on patrol along the foreshore by the fishing boats.
Posted by Paul Trodd at 08:18