Dungeness - cold, grey, e 2 - We kicked off at the point with a wander across the beach where the Glaucous Gull continued to attract a steady flow of devotees. A Black Redstart and a few Pied Wagtails were the only passerines around the sea containers, while on the sea the usual grebes, gulls a few auks and a trickle of Red-throated Divers noted. Nothing to add at the Patch apart from a couple of hundred regular gulls and more Pied Wags on the power station wall. Stopped for a natter with OL who had a Barn Owl picked up dead on the road yesterday south of Hamstreet. 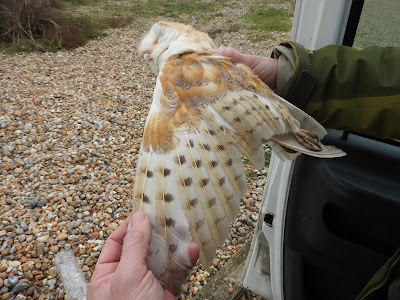 New Diggings - Two Black-necked Grebes, in partial breeding plumage, were on the lake close to the causeway road. The fields at Bouldwall were quieter than of late although 2 Great White Egrets, several Marsh Harriers and a Buzzard present, while two each of Red-crested Pochard and Long-eared Owl were reported from Dengemarsh and the Discovery pond respectively.
Pett Level - Having dropped Pat and our Kate off in Rye we headed down to Pett to check out the high tide waders. The fields around and behind the pools were packed out with hundreds of Curlews, Dunlins, Goldies and Lapwings, while it was a treat to see 10 Ruff and Spotted Redshank amongst the Redshanks. Marsh Harrier, Buzzard, Kestrel, Little Egret and a variety of dabbling ducks were also noted, although there was no sign of the ibis. 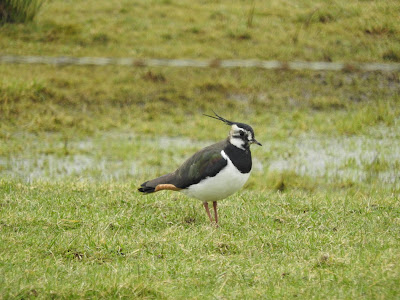 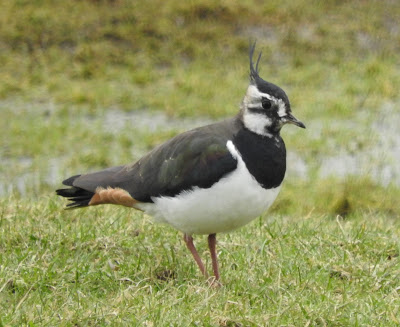 Rye Harbour - A check of Long Pits revealed very little apart from the obligatory diving ducks and grebes. On the beach reserve over 1,000 Goldies and Lapwings present, plus single figures of Blackwit, Ringed Plover and Avocet. Several pairs of Black-headed Gulls were already performing their nuptials in preparation for the forthcoming breeding season on ternery pool.