Lade - mild, wet start, sunny later, w2 - Returning from our morning round of the local patch we had an extraordinary encounter with a Peregrine which had killed a feral pigeon and was halfway through plucking and eating its catch. The amazing thing was - it was in our back garden!
While we`ve seen them cruising high over the cottage in the past, this is the first time one has actually grounded.Why on earth it would choose such an enclosed space to feed in is something of a mystery. 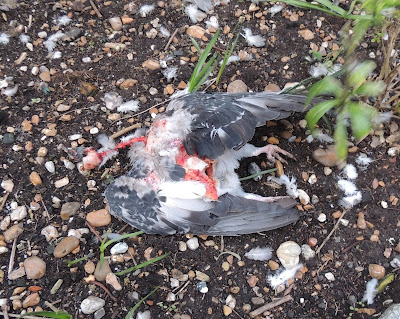 RSPB - A tour of the bird reserve this afternoon delivered all the usual wildfowl, egrets, Marsh Harriers and Smew, plus a Long-eared Owl by the pond and a Bittern from Screen hide on ARC. However, there was no further sign of this mornings Great Northern Diver on Burrowes, which was seen to fly off high towards the sea earlier.
Posted by Paul Trodd at 11:41