Dungeness - cold, overcast, sw 3 -A grim start to Saturday that warmed up later, along with increasing wind and rain. A wander along the foreshore from the lifeboat station yielded very little apart from the usual high tide gull roosts including both 1st winter Glaucous and Caspian Gulls. We joined PB at the fishing boats for an hour staring out to sea where a steady procession of Guillemots, Kittiwakes and Black-headed Gulls moved westward around the headland, plus up to 20 each of Red-throated Diver and Gannet. Just as we were about to leave 20 Brents flew up-Channel. 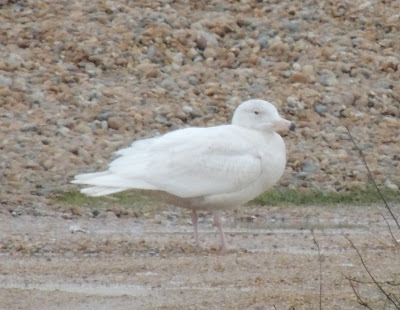 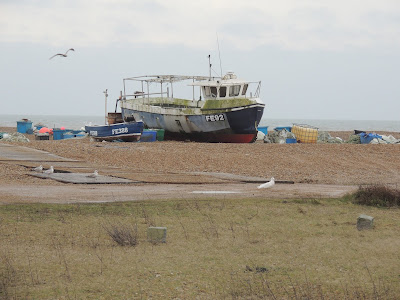 Lade - mild, windy, drizzle, sw 5 - Much milder and windier today, and less than ideal conditions for the WeBS count, of which there was a steady, but expected, decline in numbers from last month, although there was still over 200 Teal present. On the beach 550 roosting Oystercatcher, plus 480 Dunlin and 350 Sanderling.
Walland Marsh - The wind and drizzle continued to make for difficult viewing across the flatlands as CP and I trudged out to our watch point. En-route we were treated to a terrific display by a Peregrine chasing a Golden Plover that had been singled out from a large mixed flock of Lapwings and Goldies. Also, nearby 3 Buzzards, Kestrel and Marsh Harrier. As the light faded a few Marsh Harriers drifted past heading towards the Woolpack, but eventually 4 dropped in at our site, 2 adult males and 2 adult females. Things went a bit flat for a while until a spanking grey ghost Hen Harrier came through, heading for the ranges, followed by flight views of a Bittern and a couple of Snipe. And then in the twilight loose flocks totalling over 100 Mute Swans flew onto the floods along with 10 Bewick`s Swans to round off a surprisingly good session.
Posted by Paul Trodd at 13:51