Scotney - warm, dry and sunny - Having spent the past couple of days in London and Brighton it was great to get out about again in my preferred habitat. We called in at Dungeness where the fog was too thick to stick around, but once lifted it turned into a cracking day with light airs and warm sunshine, and the birds certainly came out to play too. On the roadside grass at Scotney displaying Ringed Plovers were a sign of things to come, plus Redshanks, Dunlins, Lapwings, Oystercatchers and the feral goose flock. On the lake amongst the common wildfowl 2 Black-necked Grebes with another one on the pit near the farm. 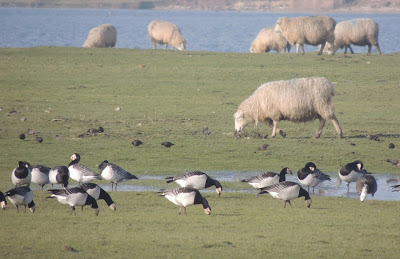 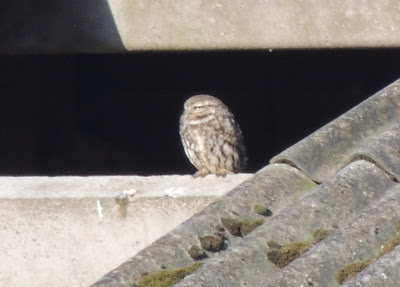 Around the farm buildings a host of passerines was a welcome change including 10 Pied and one Grey Wagtail, several Mipits, Chaffinches, 10 Goldfinches, a Black Redstart, a gang of House Sparrows while a pair of Stock Doves and a Little Owl soaked up the suns rays on a barn roof.
Out back a couple of Skylarks were in song and 6 Corn Buntings flushed from a ditch with a Green Sandpiper. Best of all though was a stunning male Hen Harrier quartering fields towards Cheyne Court where Kestrel, 2 Common Buzzards and a Peregrine noted. On the new pits 62 Shelducks, 4 Egyptian Geese, 5 Little Egrets, 20 Shoveler, 2 Stonchats and several Reed Buntings. The only negative was an absence of any Tree Sparrows.
Boulderwall - Plenty of activity here on the fields with hundreds of Lapwing, Golden Plovers, Wigeons, Starlings and the like, plus 6 White-fronts, 2 Great White Egrets, several Marsh Harriers and 2 Stonechats. A Glossy Ibis did a tour of the site earlier (presumably the Pett bird) while a Long-eared Owl had returned to its roost site behind the pond, despite being flushed on Sunday, and a Slavonian Grebe was on Burrowes. It was busy around the visitors centre with half termers.