Saturday - Dungeness - showers, cloudy, s 4 - A spell in the seawatch hide with OL and SP this morning produced a steady, and typical for the time of year, up-Channel passage of Brent Geese (the final tally today was just over 2,000) along with an assortment of ducks such as Common Scoter, Shelduck, Pintail, Wigeon and Merganser, plus Fulmar and Red-throated Diver. This is my 15th spring seawatching season since moving down here from inland Bedfordshire and the spectacle of  large skeins of Brents heading north-east never fails to impress. The weather conditions were near perfect this morning, apart from the odd shower, with an onshore wind pushing some of the flocks so close you could hear their babbling contact calls, superb stuff. 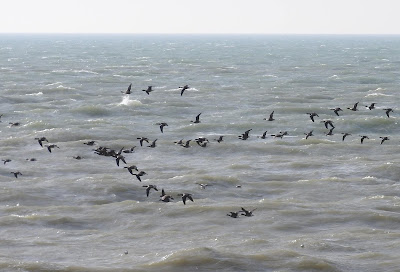 Sunday - Lade - drizzle, cloudy, sw 5 - A circuit of the local patch in blustery weather conditions was largely uneventful with just a lone Goldeneye on south lake of any note and a couple of Chiffchaffs singing around the pond. On the causeway, out of the wind and when the sun broke through, it was quite pleasant, encouraging a few bumble bees on the wing and Barney to soak up a few rays while I scanned north lake. 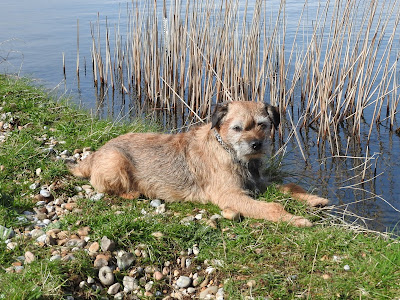 This afternoon I joined CP for the final harrier count of the season out on Walland Marsh where 12 Marsh Harriers came to roost from our watch point overlooking reed beds, including a stunning adult male. Also noted in the general area, three Common Buzzards, two Ravens, five roosting Great White Egrets, singing Cetti`s Warblers, Skylark, Reed Buntings and Water Rails, plus two sightings of a Barn Owl.
Posted by Paul Trodd at 12:15