Lade - Lockdown Day 8 - cold, dry and sunny, ne 5 - Well that's the first week of purgatory over! Here at Plovers the spring period is normally our busiest with guests coming and going, but not so this year of course, as along with many other small businesses hereabouts we`re closed until further notice. How many will reopen once this is all over only time will tell, but I`m not complaining as there are people far worse off than us. On the plus side down here on the coast is probably one of the best places to sit out the pandemic, and at least we`re still allowed out for an exercise walk, for the time being anyway.
Anyhow, the highlight of the day was our walk out back which we managed to string out for a couple of hours, despite a biting east wind. We encountered just four other humans and a couple of dogs along the way; the place had the feel of Christmas Day afternoon about it when everyone`s indoors watching telly. There was hardly any bird activity around the ponds apart from a couple of Cetti`s Warblers arguing over territorial rights. On the lakes the wildfowl seem to be diminishing by the day as they depart for their breeding grounds, with just a handful of Teal and Shoveler remaining along with two Goldeneyes.
Just before turning for home at Kerton Road pit, and having all but given up on finding any migrants, I heard the distinctive `sweep` call of a Yellow Wagtail, and there high over the desert shingle ridges was a tiny slash of yellow against a cobalt sky, bounding north for all its worth. An up lifting sight if ever I needed one, and species number 74 for the list. 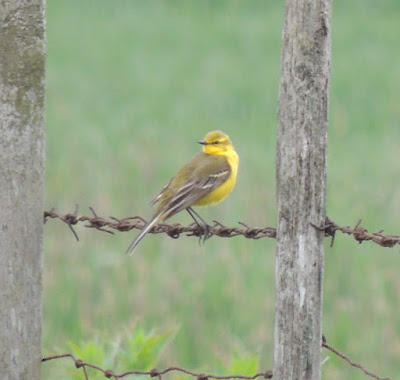 One from yesteryear at Dengemarsh
Posted by Paul Trodd at 11:44