Lade - cold, dry and sunny, ne 5 - Lockdown Day 3 -  We set off on our exercise walk around the local patch by mid-morning into a nippy old wind coming in off the sea, but at least it was dry with plenty of sunshine. Was good to have an over-the-fence chat with a self-isolating Brian D who was tinkering around in his back garden. He was in good spirits and had already fired up his moth trap for the season and despite it being cold last night had attracted an impressive five species to light, including an Early Grey. We only encountered half a dozen local dog-walkers along the way, all keeping a respectable distance from one another, and most of whom looked as though they were keen to get home out of the rasping wind.
Typically, in such weather conditions passerines were in short supply with only Stonechat and Linnet worthy of mention. A scan of north lake delivered at least 30 Mediterranean Gulls on the water amongst a couple of hundred Black-headed and Common Gulls, although there were probably more amongst a large flock of a thousand plus gulls that rose up and down in the distance towards Romney Salts where ploughing operations were underway. 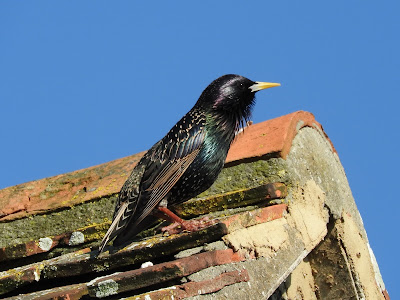 Unintended Consequences
Most of us have had to radically change our modus operandi during these strange times and it got me thinking that already, even after only Day 3, a routine seems to be developing. This time of year, with the sea watching season upon us, I would normally be spending some time down the point, followed by a brief look at the local patch, and then onto somewhere else (that is if we didn't have guests in) and maybe a look at the sea again in the afternoon.
Now there is absolutely no rush to get going in the morning as we`re only allowed out once. The highlight of the day is our (Pat, Barney and I) walk around the local patch which takes us about an hour and half; I don't think I`ve ever looked at in such detail before with every nook and cranny being scrutinised, and there is the added bonus of having Pat along with her keen long-sight to callout distant birds.
Something else I did today that I can`t remember ever doing was to read the i newspaper - from back to front in one hit, which took about the same time as to walk the patch. Normally I`d just scan the sports pages ( remember that simple pleasure, the footie reports, to check how QPR had done the night before, that sort of thing) and carry on with my day. Actually, for 65p its a cracking read and real value for money, while afterwards you can use it for all sorts of useful things, like lighting the fire, lining the cat litter tray (if you have a cat, of course) and most important of all, rip it into squares for toilet paper, just like me old mum used to do with the Daily Mirror, but without the hazard of black print transfer, if you catch my drift!
Anyhow, I`m rambling on a bit now, and it`ll soon be time to go to the front door and clap like mad in appreciation of our magnificent NHS, and when we come back in I can sit down and enjoy my ration of six squares of Cadbury chocolate, another unintended consequence of the lockdown.