Lade - Lockdown Day 6 - cold, cloudy, showers, ne 7 - Although, yesterday`s weather was sunny and windy at least it was dry. Today it stepped up somewhat with a rasping gale force wind whipping in off the bay together with wintry showers throughout, mostly of hail; one of which we managed to connect with during our exercise walk this morning! However, it didn`t deter at least four kite surfers who tried their luck on the beach until intercepted by the police and told to go home, while in a similar vein the weekend fishing camp remained in the willow swamp. 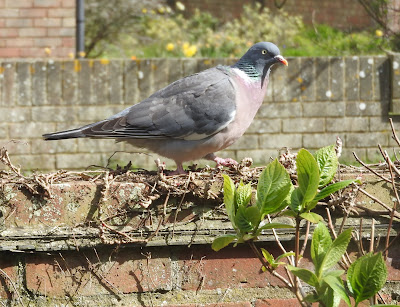 There was little change to the birding scene with the five Goldeneyes still on south lake and a singing Chifffchaff by the ponds, although yesterday a Sandwich Tern on the bay was new for the local patch Lockdown List. Todays list newbie (72 species) was a Firecrest calling from the garden fir trees and briefly seen, despite the gale, while a Sparrowhawk made a dusk time foray into the back garden. Also of note was a Woodpigeon on the front wall making short work of the buds on our Virginia creeper!
Posted by Paul Trodd at 15:03