Lade - cloudy, dry morning, wet afternoon, se3 - A day of two halves weather wise with not much change on the local patch apart from an small influx of six Stonechats on the desert scrub. Several pairs of Great Crested and Little Grebes displayed on the lakes alongside a pair of Goldeneye, whilst two Egyptian Geese flew over.
This afternoon in miserable weather conditions we tried again for the Red-necked Grebe on ARC without success. However, at the Screen hide RW had just located a drake Goosander out on the lake which didn't stay for long before flying off south.
Elsewhere, Water Pipits continue to be reported from the hayfields and the Glaucous Gull was noted along the beach at Dungeness in front of the lifeboat station. 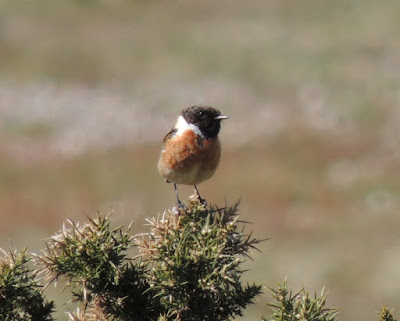