Lade - Lockdown Day 7 - cold, dry and sunny, n2 - A much more pleasant day than yesterday although still with a cool, polar airflow keeping temperatures low. Our morning stroll outback was largely uneventful with an absence of migrants, but a number of birds of prey on the wing including a cracking adult male Marsh Harrier quartering the main reedbed, four Buzzards soaring over the airfield and a male Sparrowhawk hunting back gardens along the coastal strip. The drying wind and reduced rainfall is starting to have an effect on water levels on the lake with a noticeable reduction of around 9" from the winter peak, as depicted below. 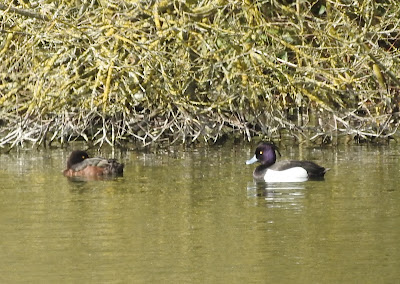 After doing a spot of sky-watching around midday, and not seeing a great deal, I continued working on storm damage to the front of the cottage when Pat rushed around with the phone: it was Chris P calling from St Mary`s-in-the-Marsh who was watching a White-tailed Eagle soaring over New Romney!! I grabbed the bins and nipped around Hull Road to look across Lade north, eventually picking up the monster raptor somewhere over Romney Salts/Littlestone way. It was very distant as it soared up into the cloud base putting up loads of gulls and what I took to be a couple of Buzzards in close attendance. The bird eventually drifted out of sight after which it was located further up the coast at Hythe by Ian R. A terrific find by Owen L and many thanks to Chris and Martin for the calls. That`s the 73th species for the Lockdown List, and a totally unexpected one, although I guess what with the re-introduction programme underway on the Isle Wight we may well see a few more in future.
Posted by Paul Trodd at 10:51