Lade - cool, dry and sunny, se2 - A stunning morning for the first of what will become our daily "exercise walkouts" from Plovers on Day 1 of the three week coronavirus lockdown. We`re fortunate living beside the NNR that within a couple of minutes we`re on the shingle ridges and able to walk the local patch where its easy to avoid the few people present.
Bird wise it was fairly quiet with five Goldeneyes still on south lake, singing Chiffchaffs by the ponds and a hunting Sparrowhawk across north lake. Small numbers of wintering ducks remain for the time being, amid ever increasing pairs of breeding Great Crested and Little Grebes, while a Peacock butterfly was on the wing along the main track. The only unusual sighting, or rather hearing, was a single Siskin that zinged overhead and out to sea. 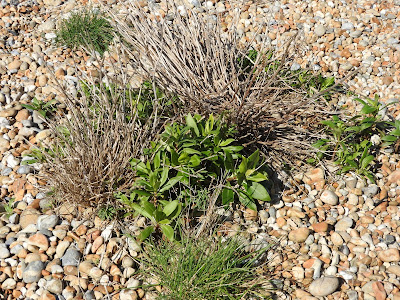 A couple of other observations of note this morning. Firstly, the resilience of Valerian, that last year RSPB spent a lot of time and effort spraying what is an invasive species, although it does seem to attract plenty of insects to its pollen-rich blooms. However, it has returned with a vengeance, as nearly all of the sprayed dead clumps have now burst into greenery.
The second striking observation can be found in the skies above the Romney Marsh. In normal times I could count upwards of 20 vapour trails as planes homed in on a tracker unit situated out near Old Romney. This morning there were none, our carbon footprint since this pandemic must have reduced significantly. 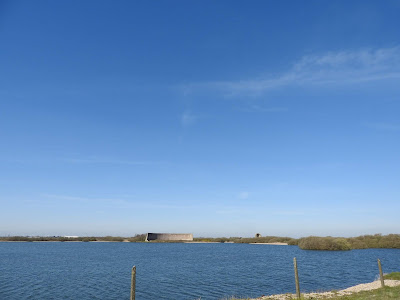 Clear skies over Romney Marsh
Posted by Paul Trodd at 14:37