Lade - Lockdown Day 9 - cold, dry and sunny, ne 2 - As I`m suffering from an impinged shoulder and couldn't sleep I was up early and listening to the nascent dawn chorus in the garden gloom along with a steaming cup of tea. There wasn't a human sound to be heard, no cars carrying an early commuter to work, planes overhead or dog-walker, nothing; it was like Christmas Day afternoon when everyone is indoors watching telly. In the stillness of night a rime of frost had settled on the cottage slates, glinting in the first rays of the new day as a distant Blackbird delivered a half-hearted lament. While I was trying to work out what day of the week it was (they seem to have melded into one of late) our local gang of sparrows chirped up from their roost in the pyracantha thicket bringing me back to reality.
Barney snuffled around the garden checking out last nights nocturnal odours. Several times he seemed to hit a `wall` as he investigated each smell: was it a Badger or Fox that had been rooting around under the fir trees, or maybe one of several transient cats or even a wandering Hedgehog, although I`ve not seen one out of hibernation yet?  Apparently, a dog`s sense of smell is fifty times more sensitive than ours; I can`t imagine what that would be like... 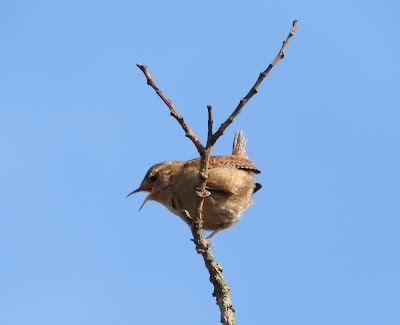 Wrens were in fine voice today 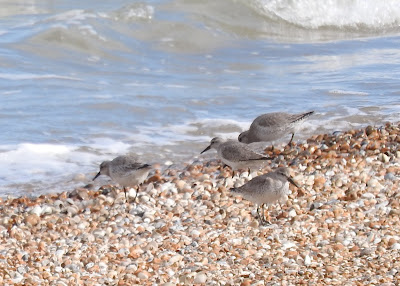 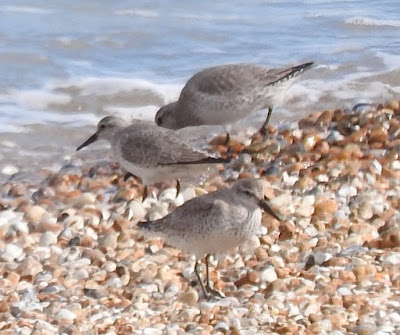 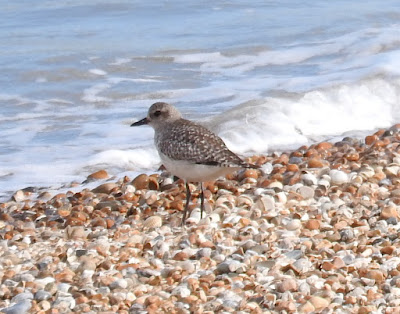 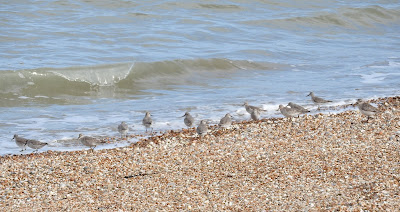 Knots and a Grey Plover on the beach

Our daily outing was full of surprises, mainly due to the east wind that has at last relented. A pair of Canada Geese (75) on Kerton Road pit looking for a nest site was the first of five species new for the Lockdown List. Our first Swallow (76) of spring zipped over south lake and sped north, closely followed by a trio of Barnacle Geese (77) heading south calling (an unusual record here) that were later noted on Dengemarsh (MC). Plenty of resident birds were in fine voice including loads of Wrens and Dunnocks in dry scrub, Cetti`s Warblers and Reed Buntings in the willow swamp and Skylarks and Meadow Pipits over the desert. 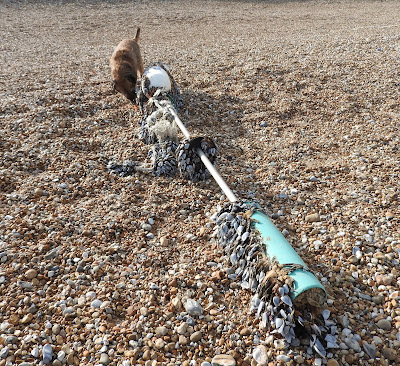 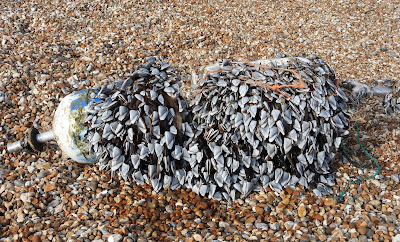 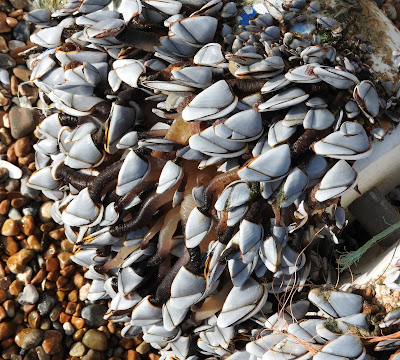 Goose Barnacles on the beach

The walk back along the beach delivered a few waders: Curlews and Oystercatchers, Dunlins and Sanderlings, 4 Ringed Plover, 20 Knots, Grey Plover (78) and Turnstone (79). Best of all though was a Dan-can buoy washed up on the beach festooned with hundreds of Goose Barnacles.
Other local news today concerned another Sea-eagle sighting over New Romney by Chris P and Owen L.
Posted by Paul Trodd at 11:37