Lade  - mild, cloudy, sw 3 - 0700hrs - There was nothing much of note over the pits first thing although the Chiffchaff count rose to 10, including two birds singing and feeding around the pond in the garden.
Dungeness - 1030hrs - We were on grand parent duty this weekend and our six year old grandson Albert was keen to try out his new 8x30 bins in conjunction with a Plovers checklist. I`ve always adopted the `two hour rule` for nippers under ten years of age, as any longer and they tend to get fed up. Other criteria to consider are: the weather, it has to be fine, which it was this morning; the birds need to be close and, crucially, said junior birder has to want to go, which he did. 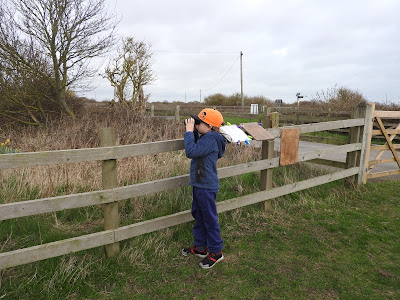 So, we were all set and raring to go, with our kit in order and a snack to hand (cos little kids have to eat constantly, or at least this one does!). We headed for the bird reserve, pausing first at Boulderwall for Tree Sparrows where at least nine birds showed like good `uns on the feeders and perched in nearby scrub chupping away merrily. I was meticulous that the little fella got onto each species properly and confirmed the id by telling me a few salient field markings, as he was keeping a tally for the trip. He also noted Reed Bunting, Greenfinch, Chaffinch, Great and Blue Tits here. 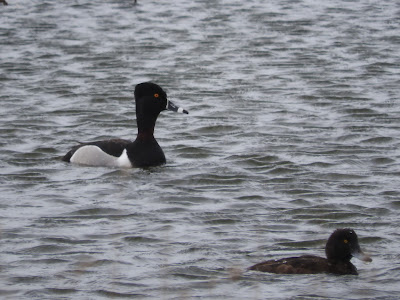 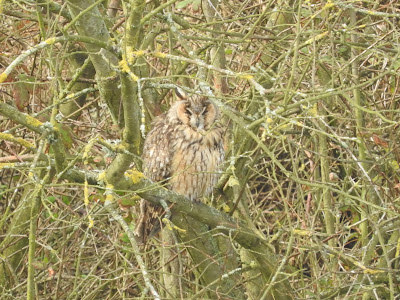 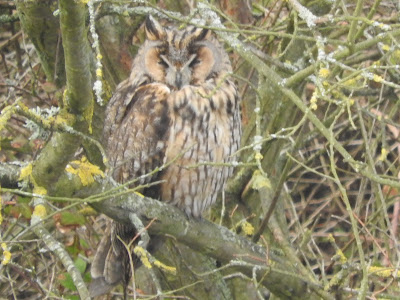 Moving up to Cook`s Pool I couldn't believe our luck as the drake Ring-necked Duck was virtually the closet bird to the track, displaying to the Tufted Ducks. Wigeon, Coot, Moorhen, Little Egret and Cetti`s Warbler were all identified around the pool, plus Lapwing, Stock Dove, Canada and Greylag Geese on the fields.
We then spent some time birding from the hides around Burrowes where his list rattled merrily along with more wildfowl, gulls, Cormorants and the like, including Goldeneye and three Pintails. The egg display in Makepeace hide was duly inspected, as were the whale bones by the Dipping Pond, where we finished with superb views of the roosting Long-eared Owl, which really did put on a show; preening, ear tufts erect, orange irides blinking, the full works, and not a single twig obscuring the head. "Long-eared Owl over my shoulder"

We actually spent almost three hours in the field, including some time nattering in the visitor centre and collecting a Long-eared Owl pin badge which is now pinned proudly on his fleece. So, a successful jaunt all round and of the 62 species recorded this morning I`m confident he managed to properly see 48 species - with no string attached!