Lade - 0630hrs - cool, sunny, w 2 - Following the fog of yesterday this morning dawned bright and sunny with a cool westerly airflow. We ventured into the Kerton Road pit first off to check for an early Little Ringed Ringed, of which there was no sign. However, Ringed Plover, Oystercatcher, Shelduck, Skylark and Mipit all showed signs of breeding, but the island that once supported a Black-headed Gull colony is now unsuitable, being overgrown with willow scrub. 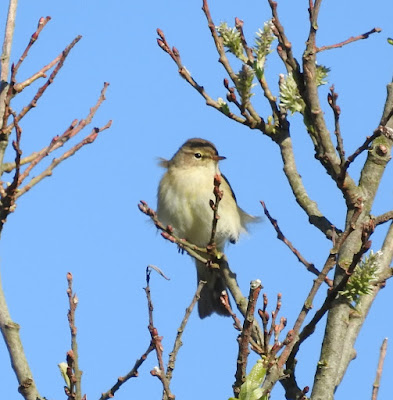 Chiffchaff - bird of the day

Back at Lade the willow swamp held at least five singing Chiffchaffs with several others heard in back gardens along Leonard Road; judging from comments on Twitter there appears to have a been something a fall of Chiffchaffs this morning with reports from across the peninsula. There was no sign of either the Slavonian Grebe or Great White Egrets since last weekend, so I can only assume they`ve moved on.
Dungeness - After assisting CP moving sheets of marine ply into the seawatch hide in preparation for tomorrows rebuild we checked the lighthouse garden where at least two Chiffchaffs were feeding amongst the Euphorbias.
On the bird reserve this afternoon the Black-necked Grebes were still on a choppy New Diggings, but there was no sign of the Long-eared Owls behind the Dipping Pool. On Boulderwall Pools the long-staying Ring-necked Duck was at the far end of Tanner`s associating with Tufted Ducks, plus a few Wigeon, Teal and five Little Egrets, but there was no sign of the Garganey and Smew from earlier. Burrowes was quiet apart from the usual gulls and wildfowl.