Lade - cool, sunny, w 2 - 0800hrs - A cracking morning to be out in the field with light airs and warm sunshine taking effect by midday. Whilst standing on the old railway track scanning the Desert for an early Wheatear the Herring Gulls kicked off big style over the caravan park by the coast. They were all up in the sky wailing and shrieking like banshees, which could only mean one thing... and sure enough I eventually latched onto two raptors soaring down the coastline - Red Kites, classic March migrants. By now all the Jackdaws, Crows, Starlings and feral pigeons along the coastal strip were airborne amongst the gulls, combining to make a huge mass of swirling birds, and a lone Crow persistently mobbing a Kite. I followed the two birds south as they entered Dungeness airspace, dragging up more Herring Gulls along the way, until eventually disappearing from view. Although I didn't notice it at the time a Peregrine sat on the wall `mirror` may well have been  involved in the `welcoming` committee at some stage. 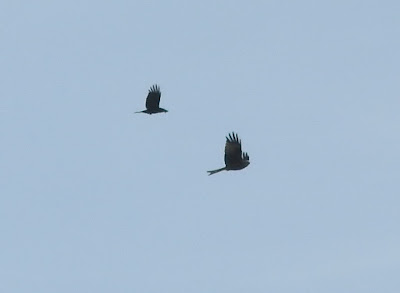 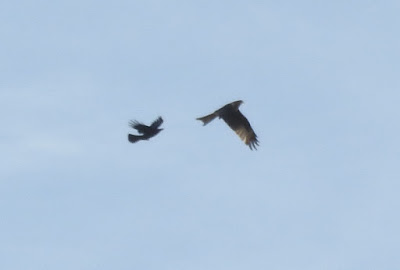 Red Kite being mobbed by a Crow

Old Romney - Continuing with the raptor theme, between New and Old Romney around noon at least six Common Buzzards and three Kestrels were taking advantage of the thermals, while one of the former was sat atop the ruins of Hope Church. Several singing Yellowhammers were also heard. 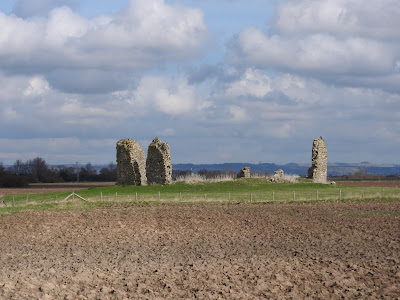 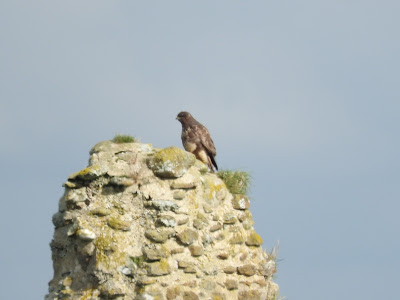 Dungeness - From Hanson hide this afternoon, five Goldeneyes and four Shelducks on the lake, a Great White Egret in the reedbed and several soaring Marsh Harriers and Common Buzzards over the water tower. From the causeway road two Slavonian and a Black-necked Grebe on New Diggings.
Posted by Paul Trodd at 10:41